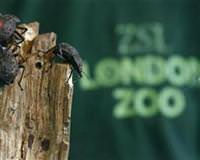 Summer nights are for spending outside, especially in London where luxuriantly long light evenings are the perfect opportunity to explore some of the capital's treasures after work. Here are five favorites to enjoy:

London's oldest botanic garden was founded in 1673 by the Society of Apothecaries of London so their apprentices could grow and study medicinal plants. Still thriving more than three centuries later, this 3.5-acre walled Eden in the upmarket environs of the Royal Borough of Kensington and Chelsea lives up to its billing as London's Secret Garden.

Small enough to feel intimate, big enough to get disorientated in the winding, shadowed glades, the physic garden is home to an astonishing array of herbs, ferns, flowers and plants from all corners of the globe. Intriguing examples of medicinal botany include the Chinese firethorn Pyracantha Fortuneana, the aptly named Viola Odorata (used as a laxative) and numerous vibrant, poisonous poppies surrounded by skull and crossbones warning signs.

Every Wednesday from June 29 until August 31 Chelsea Physic Garden will open late for a late-night talks series celebrating trees. Topics range from "Oaks in Folklore and Legend" to the "Art of Bonsai." Tickets are 15 pounds($24)and include entry to the garden and an opportunity to sample the delights of the hugely popular Tangerine Dream Cafe.

It's a magical formula: Animals, alcohol and a ban on children. Every Friday through June and July, London Zoo opens its gates after hours to over-18s and embraces the feel of a mini festival. A Pimms bar, champagne teepee, real ale tent and International Street Food Festival add to the party atmosphere but the animals are the real stars of the show.

Check out the penguin 'beach bar' next to their newly refurbished clear glass pool - affording great views of aquatic playtime - and ogle Lucifer, the zoo's regal male lion as he settles lazily in the gathering twilight, every toothy yawn garnering a gleeful "Oooh!" from the crowd. If you're organized you can follow the schedule to fit in "Owl o' Clock," "Giraffe Feed and Talk" and "Meerkat and Mongoose Mayhem" - among other highlights.

If you're less organized, just enjoy the excitement of after-hours access to London's most exotic inhabitants, with the added bonus of face-painting, cabaret and a silent disco. Tickets cost 18.45 pounds per person and the zoo is open until 10pm, although animal houses close at 9pm.

Situated on London's trendy South Bank, The Globe was rebuilt on the site of the original playhouse and aims to recreate the theater-going experience of Elizabethan times. The crowd is probably a lot more civilized than in Shakespeare's day, but the charm of open-air drama is undiminished. Either stand in the pit with a worm's eye of the action at close range (not for the faint of feet; the plays can be three hours long) or book a space on a bench and remember to hire a cushion.

The grand central courtyard of Somerset House, built in 1547 by Edward Seymour Duke of Somerset, provides a curious patch of calm amid the bustle of central London. The space is currently home to Chinese artist and recently released political prisoner Ai Weiwei's giant animal heads, who stare mournfully into the courtyard's pattering fountains, but from July 27 until August 7 will be transformed into a giant open-air cinema. Advertising a line-up of "classic and contemporary cinema," organizers will show a different film every night, including "The Big Blue," "Thelma & Louise" and the UK premier of Almodovar's "The Skin I Live In." Somerset House also boasts a selection of beautiful, if pricey, bars on the terrace overlooking the Thames for a pre- or post-cinema pint.

With British weather being notoriously unreliable it's a good idea to have a plan B for an evening's entertainment. London has an embarrassment of riches when it comes to late-night gallery and museum openings, and the Science Museum Lates are a jewel in the crown. Again, children are banned, providing a perfect opportunity to play with the exhibits undisturbed - with a glass of wine from the bar in hand. The Science Museum genuinely makes learning fun, with touching, prodding, building and dissembling the displays very much allowed.

June's special exhibition theme is the science of climate change, with speed-dating, a silent disco and thrillingly named cockroach tour of the museum also on offer. A DJ playing in the entrance hall and tasty, simple food for sale in the cafe create a buzzing atmosphere of excitement. Lates take place on the last Wednesday of every month, and as an added bonus entry is free. Get there early to beat the long (though fast-moving) queues.