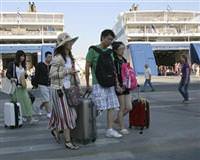 Clashes between hooded youths and police in Athens this week have dented Greece's image but tourism officials say this should not stop the hard-hit sector rebounding this year.

Tourism revenues sank by a fifth from 2008 to 2010, hit first by the global downturn and then by anti-austerity riots in May last year in which three bank employees were killed.

Greece's debt crisis this year has seen social unrest and this week street battles, tear gas and fires during Athens anti-austerity protests, but officials say they still expect a 10 percent increase in tourist arrivals this summer.

This would be crucial for the crisis-hit country where tourism accounts for one in five jobs and 16 percent of GDP.

Officials are hoping the bad publicity will be short-lived.

"Of course we are worried but if there is nothing more, and today looks calm, I don't think this will have a significant impact," said George Drakopoulos, general manager of Greece's main tourism industry association SETE, a day after the clashes.

"It hurts our image abroad, but considering the flow of bookings since the beginning of the year, this should have an impact but a rather minimal one."

The effect is likely to be felt harder in central Athens, where most protest rallies have taken place near parliament, rather than on the sun-drenched islands.

Vassilis Pararais, front desk manager at the Arethusa hotel, just a few meters away from Syntagma square where the riots raged on Tuesday and Wednesday, said he expected a wave of cancellations in his hotel to be temporary.

"A lot of clients are worried, a lot are asking questions and have moved out of the center of Athens, but I think it's over now," Pararais said on Thursday as the Syntagma square was quiet and largely cleared of debris from the clashes.

He said 40 of his 150 guests had moved out because of the violence and expected a cancellation rate of about 10 percent for the coming weeks.

Mexican tourist Karla Cervantes walked on Syntagma square a day after the clashes, surveying the scene with a scarf covering her mouth and nose to shield against the toxic particles still hanging in the air.

"It gives a bad impression, we can't see things as they really are," she said during a brief stop in Athens as part of a cruise tour. "We can't breathe well."

Others were more relaxed, including Spanish tourists who said they had seen similar protests back home.

"It is the same in Barcelona," Trini Sarda said.

Tourists not deterred by the violence do risk being caught out by strikes. Visitors this week were affected by a 48-hour general strike and then a seamen's strike which halted ferry traffic.

All ferries from Athens' main Piraeus port were canceled for three days, a coastguard spokeswoman said.

Aurelia Boldisteanu, on a visit from Romania, said she did not mind the unrest.

"We've had much more than this with our (1989) revolution, we know how it is," she said, adding: "We understand the people here, we have the same problems."