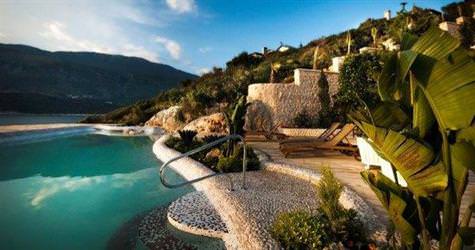 The travel section in England’s famous newspaper lists a hotel in Turkey as the best on the Mediterranean.

Located in Antalya's Kaş district, the Peninsula Gardens Hotel was written up by Britain's The Times newspaper as being the best hotel on the Mediterranean.
The boutique hotel Peninsula Gardens is situated on a cliff along the Çukurbağ peninsula in Kaş, and has only begun to accommodate visitors this year. Built in stone and wood complimentary to the natural surroundings, each hotel room is named after precious stones.
Hotel administrator Nergis Uzun explains that the hotel was built and landscaped entirely out of natural materials and has 23 rooms, 18 of which have private pools. Emphasizing that even though this is just their first year in operation, The Times has selected the Peninsula Gardens as the best hotel along the Mediterranean, Uzun expresses the pride she feels.
Uzun, ''Our hotel is covered entirely with plants. The environment is completely green. Our staff is extremely professional. Most of our rooms have private pools. We are located along the coast of the Mediterranean Sea."
The article published in the newspaper's travel section writes that British vacationer Zee Brewer was extremely impressed with the hotel's construction being so in tune with nature and that it provides luxurious services at reasonable prices. Brewer also states that the Peninsula Gardens hotel is the only place he would consider coming back to if he travelled all over the world.