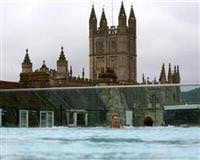 A comfortable two-hour drive from London lies the picturesque British spa town of Bath. Dominated by a population of bourgeois pensioners and students from all walks of life, the city is steeped in history and bursting with culture. Reuters correspondents with local knowledge help you get the most out of 48 hours in a city with its share of old English charm and more than just a pinch of modern zest.

6 p.m. - Bath was first established as a spa resort under the Latin name Aquae Sulis, or "the waters of Sulis," by the Romans in AD 43. Nestled between the rolling hills of Somerset county, in the valley of the river Avon, Bath is the only place in the United Kingdom with naturally occurring hot springs. What better way to kick off your weekend then, than by soaking in the roof-top hot tub of the Thermae Bath Spa, aroma steam rooms and invigorating ice baths, or feeling the heat of volcanic basalt stones surge through your body while indulging in a Hot Stone Massage. Sessions start at 25 pounds per person. Special packages are available and should be booked in advance. (www.thermaebathspa.com/)

10 p.m. - Bath's international student population is reflected in the city's multicultural flair and patchwork of culinary and cultural offerings. Restaurant, bar and club Opa!, on Bath's North Parade just a stone's throw from the Abbey, serves aromatic Greek dishes, tantalizing meze and a selection of great wines, cocktails and beers. As the evening wears on, take to the dance floor where locals and tourists shake off the stress of the working week until the small hours of the morning.

10 a.m. - On a fine day foodies come from as far afield as Gloucester and Bristol to visit Bath's farmer's market to sell and buy local produce. But even if you don't intend to buy any of the meats, cheeses, vegetables or mouth-watering baked goods, a stroll through the stalls is worth it just for the smells, sights and free samples. The market is housed in Green Park Station, which between 1870 and the late 1960s was the city's main railway station. Make sure you arrive before noon to catch the main hustle and bustle, then head over to the Green Park Brasserie & Bar for a caffeine boost to flush away any groggy remnants from the night before. (www.greenparkbrasserie.com/)

12 p.m. - Bath's trademark "Crescent" is a residential road of 30 houses, designed by the architect John Wood the Younger and constructed between 1767 and 1774. Over the past 100 years it has been home to numerous historical figures, including Marie-Louise princesse de Lamballe, the lady in waiting to Queen Marie Antoinette, Prince Frederick, Duke of York and Albany, and explorer Thomas Falconer. Today most of the houses are privately owned. Number 1 is a museum run by the Bath Preservation Trust. (here)

After admiring the curved facades and strolling across the ha-ha in front of the Crescent, walk along Brock Street toward The Circus -- another example of great Georgian architecture -- before heading down to the Porter Bar, the most creative vegetarian pub in town, for a light lunch. (www.theporter.co.uk/)

2 p.m. - Many locals will argue that rugby to Bath is what tennis is to Wimbledon. The professional rugby union club plays and trains at the Recreation Ground, affectionately dubbed "The Rec," which seats almost 12,000. There's no better way to bond with the locals and share their seemingly innate passion for sports and celebration. Match times and ticket prices vary. (www.bathrugby.com)

If you'd prefer to avoid the crowds of burly rugby enthusiasts, take a stroll down the historic boulevard that is Great Pultney Street, built in 1789, and peruse the shops that line Pultney Bridge. Then head to one of the numerous parks -- Henrietta, Victoria or Alexandra for example -- to admire the rich range of flora and fauna. Sydney Gardens, on the slopes of Bathwick Hill upon which the University is perched, is the oldest park in Bath and was regularly frequented by novelist and Bath resident Jane Austen.

7 p.m. - To many "The Walrus and Carpenter" may be just a narrative poem by Lewis Carroll, but to Bathonians -- as the locals call themselves -- it is the name of a charming restaurant that serves wholesome traditional English dishes. Try the fish pie, organic rump steak or ratatouille to tantalize your taste buds, washed down with a pint of Bath's local Gem Ale. Top it off with Big Bertha's Banana Cake or Aunty Audrey's Apple Pie.

If you're not ready to call it a day, cross the street and treat yourself to a show at the 200-year-old Royal Theater. As well as hosting prolific actors and companies, it holds a number of festivals each year including the Bath Shakespeare Festival, the Bath International Puppet Festival and the Peter Hall Company Season. Many top plays start at the Theater Royal before their official opening in London. (www.theatreroyal.org.uk)

10 a.m. - After a lazy breakfast at the Riverside Cafe, tucked away in the arch of Pultney Bridge, head over to the mother of all tourist attractions in Bath: the ruins of the Roman bath houses. Together with adjoining Pump Rooms, the baths attract more than one million visitors a year. On the recently re-developed site, you can explore the Sacred Spring, the Roman Temple, the Roman Bath House and the Museum, admire the 19th century carvings of Roman Emperors and Governors of Roman Britain guarding the terrace, and muse at the ancient hypocaust heating system which served the sweat rooms.

If you have spare time before lunch climb aboard the open-topped bus from just outside the Guildhall market hall for a scenic ride around the periphery of the city. (www.riversidecafebath.co.uk)

The tours last between 40 and 50 minutes and the hop-on-hop-off concept allows you to use it to ferry from one attraction to the other. Get off the bus at Claverton Down and walk across the University grounds to the American Museum or take a stroll across the golf course. If you're feeling lazy, stay on the bus and listen to the live commentary in English or, if you prefer, a pre-recorded commentary in Spanish, French, German, Italian, Japanese, Russian, Cantonese, Mandarin or Polish.

12 p.m. - Head back to the city center and catch a taxi from just outside the Abbey to the nearby Wheatsheaf pub at Combe Hay. The farmhouse pub dates back to 1576 and some parts of the current structure date back to the 16th century. It has served food and drink to hungry travelers since the 18th century, and the waitress will be eager to tell you that Hollywood actors Johnny Depp and Nicolas Cage -- both once residents of Bath -- have been known to eat their Sunday lunches here.

A digestive-aiding walk across the surrounding fields will provide you with great views of Bath, especially on a clear day.

2 p.m. - Catch a cab back to the city center and visit the Abbey, an Anglican parish church and former Benedictine monastery that was founded in the 7th century. The Abbey is a trademark of Bath and aside from the breathtaking architectural features on the inside and outside of the structure, visitors can also admire numerous memorials inside it, such as those dedicated to Beau Nash, Arthur Phillip, the first governor of the Australian colony of New South Wales, and William Bingham, the co-founder of the Bank of North America -- the first bank of the new nation in 1781.

4 p.m. - Clear your head of twelve and a half centuries of history by crossing through Henrietta Park and renting a canoe or punt from the Bath Boating Station. If you make it past the Batheaston by-pass and to the Bathampton Weir and Pub, treat yourself to a drink on the banks of the Avon River before navigating back to the boathouse downstream.

6 p.m. - To round off your weekend in Bath, have an early dinner at Beaujolais bistro bar. Plenty of wine will undoubtedly help you digest a history-and-culture-packed weekend and send you into the working week refreshed and relaxed. (www.beaujolaisbath.co.uk/)