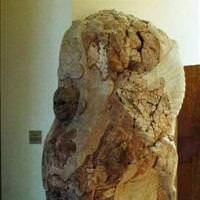 The ancient Sphinx of Hattusa has been returned by a Berlin museum to its home in Turkey, the Prussian Cultural Heritage Foundation said on Thursday, after more than 70 years of wrangling over the valuable sculpture.

The 3,000-year-old sphinx from the capital of the Hittite empire had been on display in the Pergamon Museum since 1934, but its fate had been in limbo for decades as neither the Turkish authorities or the museum were able to produce legitimate ownership documents.

Turkey's Culture Minister Ertugrul Gunay handed down an ultimatum to the foundation in February to return the sculpture of the sphinx -- a mythical creature with a lion's body and human head -- or German archaeologists would not be permitted to carry out excavations in the country.

The German foundation agreed in May to return the sphinx, one of two unearthed in 1907 in Hattusa in central Turkey and sent to Berlin along with thousands of other Hittite artifacts.

Earlier this year, the foundation rejected a request from the Egyptian Supreme Council of Antiquities to return the 3,400-year-old bust of Queen Nefertiti, which draws over 1 million visitors annually to the Berlin museum.