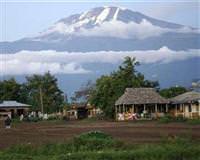 All tourism involves at least a bit of walking, even if it's just off the plane to a waiting limousine. But for those who want to put walking or hiking at the heart of their holiday fun, online travel adviser Cheapflights offers its top 10 hiking destinations.

The granddaddy of mammoth hikes, the Appalachian Trail is over 2,150 miles long and passes through 14 states. While fewer than 500 people successfully hike the trail in its entirety each year, as many as 3 million people complete a portion of it. Not only does the Appalachian Trail fulfil a hiker's desire to experience wildlife in its most wholesome state, the trail is a great way to bond with other passionate hikers, and test one's ability to abandon civilization for significant amounts of time.

More often than not, hiking entails high trees, rocks, poisonous plants, tents and the daunting task of cooking over a fire. If this sounds more like a nightmare than a vacation, consider the Camino Frances, one of the more popular routes in the famous pilgrimage known as El Camino de Santiago. What was once a popular religious expedition, this 484-mile trek has become a huge attraction for anyone - young, old, athletic, out-of-shape, religious or not - looking for a challenge. Spend your days winding through the quiet towns of France and Spain, and stay at a friendly Pilgrim Hostel, sleep in a comfy bed and enjoy a hot shower.

Along the limestone cliffs, weaving in and out of sandy beaches, lily ponds and fishing villages, is the 186-mile-long Pembrokeshire Coast Path. While not considered particularly strenuous, the several trails that make up the entire path are as short as nine miles and as long as 16 miles. Along the path, travelers can witness incredible historical sites such as 2,000-year-old forts, burial grounds from 400 A.D. and a medieval castle, or two. Bed-and-breakfasts are abundant; however campsites and hotels are available as well. Year-round buses cruise the coast picking up hikers as they choose the trails most fitting to their needs. And the Pembrokeshire Path is no stranger to wildlife; grey seals, puffins, foxes and hundreds of other species can all be spotted along the way.

At 19,336 feet, Mount Kilimanjaro is the highest point in Africa, and has become an increasingly popular hiking destination for travelers. Those who embark upon this journey travel through five different climate zones over a period of six to eight days, depending on the route and the operating company. Due to its rising reputation as a hotspot for adventure tourists, all hikers must travel with a guide, which can make for a costly trip, but ensures a safe arrival and an experienced person to navigate between the three volcanoes and turquoise ice fields. Porters are available to carry belongings and setup campsites for those looking for extra assistance along the way.

Occasionally, hiking trails require one to get a little wet while crossing a small stream or brook, but it's a different story when hiking the Zion Narrows. This 16-mile trail is along a slot canyon, which means a significant portion of the hike is in a river. The Narrows can seem like a maze as hikers snake through the vertical red cliffs and stumble upon waterfalls and moss-covered geological formations. Adventure seekers looking to do the entire trail can either hike from the bottom up in one day, or apply for an overnight backpacking license and tackle the trail from the top while spending the night under the starry, desert sky.

New Zealand continuously tops adventure travel lists thanks to its collection of breathtaking terrain. Surprisingly, the bleak and cratered landscape of the Tongariro Alpine Crossing is no exception. Many hikers say it initially resembles the surface of the moon, but once underway, it's evident that this 11-mile hike is anything but bleak. As a World Heritage Site, Tongariro Alpine Crossing encompasses two active volcanoes, piercing aquamarine lakes, mud pools, snowcapped peaks and alpine meadows. Not only has it become a popular spot for hikers and tourists alike, Tongariro plays a spiritual role to New Zealand's indigenous Maori people. Getting to and from the Crossing is easy and all hikers complete the journey in seven to eight hours.

Patagonia has always been a destination sought after by adventure travelers and the like because of its dramatic and challenging terrain, breathtaking views and abundance of wildlife. The 62-mile Paine Circuit travels through the Torres del Paine National Park winding between Magellanic forests, glacial lakes, ice fields and the occasional makeshift bridge. The greatest reward of the trip is the view of the sun bouncing off the rare, pink granite peaks of the Torres del Paine, so cameras are a necessity. For those hikers who aren't looking for the full 10-day adventure, a five-day trail knows as "the W" is a great alternative to the Paine Circuit.

Easily accessible from Victoria and Vancouver, the West Coast Trail is considered one of the most exhilarating trails in North America. Running 47 miles long, this path was originally created to help shipwreck survivors find their way to safety. It now guides hikers through water falls, caves, covers and sandy beaches, not to mention the scattering of relics from old shipwrecks. Along the beaches, whales and sea lions can be spotted, while minks, bears and cougars prowl the forest trails. To get the most out of the beautiful surroundings, hikers typically spend four to five days completing the trail.

Set along China's longest and most revered river, the Yangtze, the hike along Tiger Leaping Gorge is a pleasant break from the city culture that lies just 40 miles away. Flanked by the majestic, snowcapped Jade Dragon Snow Mountain and Haba Snow Mountain, this 15-mile trail, known as the High Road, follows the surging Yangtze and typically takes two days to complete. After the first day of the journey, hikers are rewarded with a visit to Naxi tea houses where they can stay the night and unwind. Due to the government's desire to attract tourists to the area, it's expected that the High Road will not last many more years as a secluded hiking trail, so it's important that adventure travelers visit soon.

As one of South America's most celebrated ancient sites, Machu Picchu attracts travelers from all over the world trying to catch a glimpse of Inca life thousands of years ago. Most visitors opt for train service to Machu Picchu, but the adventure traveler will appreciate a guided four-day hike along the Inca Trail. Much of it passes through cloud forests that are so surreal, it's easy to forget where you are, not to mention traveling past ruins like the vast agricultural terraces and climbing the infamous Dead Woman's Pass. For those who aren't quite up for the full 50-mile trek, two-day options are available, and like many guided tours, porters can be paid to carry any belongings.