Statue of Liberty interior to close for yearlong renovation 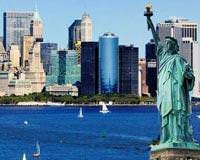 The Statue of Liberty will undergo a yearlong safety make-over, temporarily closing its interior to visitors at the end of October on the 125th anniversary of its dedication.

Tourists will still be able to visit Lady Liberty's home on Liberty Island and views of the statue in New York Harbor will be "largely unobstructed" during the $27.25 million renovation project, Interior Secretary Ken Salazar said on Wednesday.

"Two years ago, when we reopened Lady Liberty's crown to visitors for the first time since the September 11 attacks, I promised that we would continue to upgrade the interior to make it safer and more accessible for all," Salazar said in a statement.

The monument's stairs, elevators and electrical and mechanical systems will be modernized to improve safety and widen access, bringing "a 19th Century icon into the 21st Century," he said.

Salazar suggested most visitors to the monument would not be affected by the renovation, as the majority do not go inside the statue.

The point was echoed by Tegan Firth, a spokeswoman for Statue Cruises, which operates the ferry services to Liberty Island and nearby Ellis Island.

"For us, it's business as usual," Firth said in a telephone interview on Thursday.

Each day a maximum of 2,500 visitors are permitted inside the statue's base and pedestal. Another 240 visitors are allowed to climb inside up to the crown, yet on a busy summer's day some 18,000 people visit the island, she said.

Even with the interior closed, tourists can visit the island's cafe and gift shop, participate in audio tours and gather information from National Park rangers on site.

"You're still on the island, you still get this majestic view of the statue," she said. "You can still get to that iconic spot where you can take the picture that everyone takes, that one photo that everyone wants."

The interior will be open until October 28, the 125th anniversary of Lady Liberty's dedication. The copper-covered statue was a gift to the United States from France. About 3.5 million people visit every year.