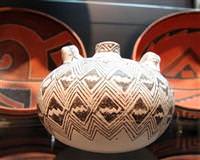 Standing by his booth on a packed Santa Fe street, his thin, black hair tied in a braid down his back, and wearing shorts and sneakers, he showed a single shallow bowl with golden trim surrounding a painted image of corn dancers. A second bowl, an "historical piece" depicting the hanging of Native Americans by the conquering Spaniards, sold for $6,000 hours after it went on sale at the Santa Fe Indian market.

"They're narratives of the human condition. We've all been in the bar with a broken heart, or broken down on the highway of life," he said.

The 47-year-old Berkeley-educated artist is one of more than 1,100 Native American artists gathered this weekend in Santa Fe for the largest Native arts market in the world. Produced by the Southwestern Association for Indian Arts (SWAIA), and considered the largest cultural event in the southwest, it brings together artists representing 100 U.S. Federally recognized tribes.

First established in 1922 by the Museum of New Mexico as part of the Santa Fe Fiesta celebration, styles of artwork now include a range of jewelry, pottery, sculpture, baskets, paintings, wooden Kachina dolls, beadwork and more.

The emphasis is on quality and authenticity, said Association officials, citing its mission of bringing "Native arts to the world by inspiring artistic excellence, fostering education, and creating meaningful partnerships."

Generations of artists come together, many of whose family members have been participating for almost 90 years.

Jared Chavez, 28, recently joined his father, a well-known jeweler from San Felipe pueblo who has been selling his work at the Indian Market since 1976. Richard Chavez, 62, calls his son's decision to embrace the trade, "the best thing that has happened in our family."

Richard's bracelets, rings and other jewelry are notable for their unique inclusion of rare gems, collected from gem and mineral shows around the country. Fossilized Mammoth tusk, black and green jade, cut into sleek lines and inlaid into gold or silver backing make for extremely popular wares. Richard sells custom orders primarily to collectors or at the Indian Market once a year.

Jared Chavez has worked with jewelry ever since he was a boy, bored one summer, and eager for something to do. While Jared's designs veer from his father's with more textured surfaces and less inlaid stone, both adhere to sleek lines and quality work. Jared proudly points to his necklace laying nearby, which he made of silver and Botswana agate. It received a large second place red ribbon for best in show.

The Market is one of Santa Fe's most profitable weekends. A recent Association survey found that the Market feeds up to $100 million into the city's economy over the weekend, not to mention directly into the pockets of Native artists.

For Santo Domingo pueblo potter Robert Tenorio, Market earnings make up half of his annual income.

His stable of collectors return year after year for the hand crafted pottery. One collector from Florida has 60 of his pots and comes every year for more; another Santa Fe family has a "Robert Tenorio" room in their house, dedicated solely to his work, he said.

Tenorio's success comes from years of building a clientele. Now 60, he's been selling his pottery at the Market since he was ten years old. Before that, he joined his mother who came to sell jewelry. Tenorio has an exceptional number of first prize entries over the years -- "enough blue ribbons to make a quilt - a whole King sized bed!"

His notoriety is also due to his dedication to traditional methods and materials learned long ago from his grandmother.

"My pots can still look old, have the thousand year look, because I use grandmother's methods," he said.

The Indian Market has evolved and grown over the years -- this year for the first time Native Alaskan tribes are included. Throughout the weekend, there are vibrant Native costumes, stunning jewelry displays, feathered ceremonial headdresses, drumming, singing and native dances, preceded by a series of Native films, lectures and visual arts events.

DeArmond Williams, 43, a pueblo Indian raised east of Santa Fe who used to work at the Market, flew in from North Carolina to see old friends.

"As Native People a lot of friends are far away. This is a gathering of all those people," he said.