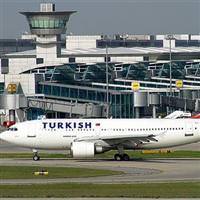 Turkish Airlines said on Thursday it will resume flights to Libya next week as the African country starts rebuilding after a six-month war that ended Muammar Gaddafi's 42-year rule.

Turkish Airlines, Europe's fourth-biggest carrier by passengers, will begin flights to Benghazi on Sept. 13 and to Tripoli on Sept. 24, according to an e-mailed press bulletin.`

The airline's inspectors examined repairs to Benghazi's airport, damaged during the fighting, and decided it was ready for flights, the statement said. Tripoli flights will resume once preparations there were completed, it added.

Turkey, which once had close ties with Gaddafi, is expected to take a leading role in multi-billion dollar deals to rebuild and develop Libya.