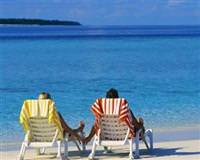 If you like to push yourself and are a bit of an adrenaline junkie, then online men's magazine AskMen's (www.askmen.com) top 10 list of extreme vacations may be just the thing for you.

Only one thing better than experimenting with high-tech vehicles is turning one into a giant fishing lure -- with you inside as bait. Stanley Submarines' custom-built, submersible Idabel ferries you down 1,500 feet below the sea off the coast of Roatan, an island off Honduras. Attached to the sub is live bait designed to lure the seldom seen six-gilled shark. From the depths of the ocean's blackness, don't be alarmed when you see this prehistoric specimen -- longer than your 13-foot sub -- approach one of the sub's nine 30-inch viewports. You'll feel Idabel rock back and forth as the gentle ocean giant works to dislodge her baited treats.

2. Dive in an exosuit

Should you ever be called on to repair external surfaces of an orbital space station, you'll have acquired some of the requisite skills by the end of this Incredible Adventures package. The Russian Space Agency's Hydrolab is a place real-life astronauts go to simulate weightlessness in a 12 meter-deep neutral buoyancy tank. If you're a certified diver of the right height and weight, you're eligible for similar training using the coolest swimwear imaginable: an Orlan space suit fitted with biometric sensors to check health readings as you complete a series of underwater tasks.

Of the many driving experiences you can book while on holiday, we naturally recommend the fastest and most daring: dragster racing. Doug Foley's Drag Racing School, of Mooresville, North Carolina, arranges this at various tracks around the U.S., for a range of dates. Packages start at $349, not including lunch and trackside photography -- a small price to pay for the thrill of crossing 300 feet of track in 10 seconds at over 100 miles per hour.

Because we have never been a fan of ordinary bus tours, we're throwing in Cox & Kings' new six-day "mountain safari" via a French-manufactured, oxygen-equipped Ecureuil to see eight of Earth's tallest peaks. Mt. Everest summiteers narrate their experiences as you whiz past the 29,035-foot mountain then later take in the Langtang, Manaslu, Lamjung, and Annapurna ranges and other Nepalese sights. Since the Ecureuil seats only two guests, this is a downright romantic trip, allowing you to score major points with your girlfriend while conveniently involving superslick machinery.

5. Wield the Jaws of Life

Does the end-of-workday beer taste sweeter after you've rappelled down three stories of a burning building, inched through smoke-filled darkness, and doused the flames? We bet it does. If you don't have the good fortune or guts to call this a day's wage, you can still sample the vocation of fire fighting at one of North America's finest training schools: Central Florida Fire Academy in Orlando. You'll use the Jaws of Life to rescue a faux victim from a burning car, test-drive that big, red, shiny truck, and finish the day with a real firehouse dinner (uh, yum?).

You played with big yellow trucks as a kid; now you can get down and dirty learning to drive actual megaton equipment around a 21-acre construction site in Bradenton, a town between Sarasota and Tampa. This daylong Construction Adventure has you eventually tossing around old tires and bowling balls on the site using a CAT 315 Excavator, CAT 257B Skid Steer Loader or CAT D3 Bulldozer. Hard hat, lunch, souvenir photo, and written evaluation are included (because we all should aspire to be better excavator operators). And not that you'd intentionally linger, but there's also timely use of a "tricked-out port-o-potty" with a flat-screen TV fitted inside.

If you don't have five free days or five buddies to take a group stuntcation, you could try the getaway version: a customizable "weekend warrior" deal that gives you a menu of extreme sports and events to choose from in and around Las Vegas. Options range from relatively tame activities like hovercraft, motocross, ATV or Sea-Doo rides, to gimmicky fire-walking, to adventures involving machines that hardly sound street legal (bonus!). One of our favorites is "street luge": a homemade sled you grab hold of to hurtle down mountain roads at up to 60 miles per hour.

Drive A Tank knows every guy's secret desire is to crush vehicles with even bigger vehicles. Which is why the Kasota, Minnesota-headquartered extreme adventure operator organizes awesome afternoons, teaching you to navigate two British army tanks -- the FV433 Abbot and the FV432 Armored Personnel Carrier -- through an obstacle course. Choose the "crush package," and -- hell yeah! -- you get to obliterate anything lying in the path of "Larry," an affectionately named 60-ton Chieftain Main Battle Tank. We hope the victim was a Pinto.

You know your Vegas trip is in capable hands when the tour guide is a Hollywood stunt guy who performed the world's first bungee jump on fire, has coordinated stunts for Sir Richard Branson and Criss Angel, and lists expertise in "high falls, air rams, explosives, heavy weapons, and bullet hits." Rich Hopkins, founder of Thrillseekers Unlimited, lends you a veritable arsenal of badass gear for adventures in and around the city. During a new five-day, small-group "Stunt Experience Vacation," safely supervised by Thrillseekers' SAG-member team, you and up to nine buddies will harness in to try high-falling, stunt-fighting and stunt-driving, and may even be (briefly) set aflame.

Sarasota-based extreme tour operator Incredible Adventures has you pulling Gs in a multimillion-dollar MiG-29 -- the kind Tom Cruise battled in Top Gun -- during a five-day trip to Moscow and nearby Nizhny Novgorod Aircraft building plant Sokol. After alighting in Moscow for sightseeing and a stay at Metropol, the classic hotel looking onto Red Square where Dr. Zhivago was filmed, you travel by train to the military airstrip where the inimitable Russian fighter was born. Then it's your choice between soaring 70,000 feet to the edge of space or performing 45 gut-punching minutes of aerobatics. Sokol's MiG pilots, who will accompany you, say to eat breakfast! before flying at Mach speeds, since acids churning on an empty stomach will make you more likely to heave. We think it's friendly advice.