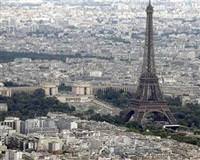 The city of glamour, grande cuisine and the ghosts of the guillotined is one of Europe's most beautiful. Welcoming some 28 million visitors a year, Paris offers everything from some of the most famous museums and restaurants in the world to charming cobblestone alleys and boutiques galore.

Reuters correspondents with local knowledge help visitors get the most out of a visit to the French capital. While 48 hours is not nearly enough for this beloved metropolis, it will whet your appetite for your next visit.

5 p.m. Why not kick off the weekend with a "verre," or glass of wine, as the French do, or perhaps a licorice-flavored pastis aperitif. Paris cafes are the pride of the city, and the most famous are located on the Left Bank. After popping in to the Eglise de Saint-Germain-des-Pres, an ancient abbey with sixth-century roots, enjoy a "pause" at Les Deux Magots or Cafe de Flore. Between the two world wars and immediately after, both cafes welcomed writers, poets and artists from Pablo Picasso and Ernest Hemingway to Albert Camus and Simone de Beauvoir.

8 p.m. Keeping with the literary theme, make your way south to Montparnasse, the neighborhood where intellectuals and artists flocked at the beginning of the 20th century. Splurge at Le Dome, an Art Deco institution featuring platters piled high with oysters and other fresh seafood. And remember the champagne -- after all, it's your first night in Paris.

10 p.m. You're close enough to stroll to the Montparnasse Tower for a spectacular view across the City of Light. The 689-foot office tower, completed in 1973, wins no prizes for beauty -- until you get to viewing area at the top from where, as Parisians like to note, you can no longer see it.

9 a.m. Hop onto one of Paris' 20,000 Velib city bikes, rentable for a modest fee from docking stations all over the city, and head to Ile de la Cite for a first look at Notre Dame before the crowds descend. Count the saints carved out along the cathedral's facade and notice the gargoyles peering menacingly from the towers of the French Gothic masterpiece.

Nearby are Sainte Chapelle with its unforgettable stained glass windows and La Conciergerie, the former prison where Marie Antoinette spent her last months before meeting her grisly end at the guillotine in 1793.

11:30 a.m. Cross to the right bank via Ile Saint-Louis -- a picturesque island in the Seine where Paris' best ice cream, Berthillon, is sold -- and you find yourself in the Marais. Once swampland, the Marais became the fashionable place to live in the 17th century before falling into disrepair. In the 19th century it was the Jewish quarter and a tasty falafel with grilled eggplant can still be had along the Rue de Rosiers. The Marais is known today for its gay and lesbian nightlife and is home also to trendy boutiques, small art galleries, cafes and museums, including the Picasso Museum and the Musee Carnavalet, which documents the history of Paris.

Enjoy lunch at one of the many cafes in the neighborhood, but don't forget to enjoy a stroll through the Place des Vosges, Paris' oldest plaza, with its stunning brick and stone arched pavilions and luxury residences. Victor Hugo was a resident in the 19th century -- and Dominique Strauss-Kahn is one today.

3 p.m. A quick metro ride from St. Paul station will take you to the Palais Royal across from the Louvre, whose rectangular garden will revive the senses before you tackle France's largest museum and the world's most visited. When it comes to the Louvre, the best strategy is to pick a wing or two -- don't try to do it all. "Courage!," as the French say.

7 a.m. It's time to sit down and enjoy a show. Indeed it's a bit touristy these days, but still -- Le Moulin Rouge cabaret and its showgirls have been entertaining Paris since 1889. A revue and meal doesn't come cheap, but how often these days can you watch a can-can during dinner? Make your way to the base of Montmartre for the show and afterwards enjoy a stroll around the (quite safe) red-light district. Prefer men in wigs instead? Try Cabaret Michou for a drag show.

9 a.m. It's time to see Paris' best-known landmark at first light. Whether you brave the queues and climb the tower -- by stairs or lift -- or just admire it from the ground, the Eiffel Tower cannot be missed. Across the Seine at Trocadero, an assortment of cafes provide first-rate views.

11 a.m. On the banks of the Seine, hop on a Bateau Mouche for a one-hour cruise along the river, passing such sights as Les Invalides, where Napoleon is buried, the Grand and Petit Palais -- both constructed for the Universal Expo in 1900 -- and the Pont Neuf, Paris' oldest bridge.

1 p.m. Head north from Trocadero to reach the Arc de Triomphe, under whose famous arch have marched scores of victorious armies, including in 1944 when French and American troops were greeted by cheering Parisians. Pay your respects at the Tomb of the Unknown Soldier, then walk east down the Champs Elysees, a celebrated tree-lined boulevard dominated today by clothing chain stores and tourists. The approach to Place de la Concorde is worth the crowds however. Admire the Luxor Obelisk honoring Pharaoh Ramses II at the center of the plaza, and ignore the traffic as you try to imagine what the square was like at the height of the French Revolution, when the guillotine erected here chopped off hundreds of heads.

3 p.m. All that contemplation of mortality calls for a visit to Pere Lachaise, Paris' biggest and most famous cemetery on the eastern side of the city. Visit the graves of scores of poets, artists, politicians and more, from Moliere and Edith Piaf to Oscar Wilde, Gertrude Stein and the Doors' Jim Morrison.

Bid adieu to your Paris weekend with a final verre at one of the many cafes around Place Gambetta and plan your next trip.