Top 10 toilets around the world 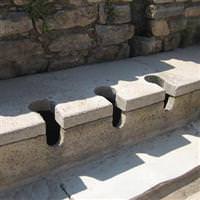 Whether you call them a restroom, loo, lavatory, toilet, or "the facilities," they are always an important part of being on the go. With this in mind the members and editors of travel website VirtualTourist.com (www.virtualtourist.com) have compiled this list of the "World's Top 10 Toilets."

Who would have thought that a loo in the middle of such a dirty, noisy, frenetic city would have classical music, fresh flowers, and even an attendant! Visitors report that it's also spotlessly clean. 2. Covent Garden; London, U.K.

If visitors to the public restrooms at Covent Garden don't notice the cleanliness and efficiency of this facility on their own there's a prominent sign on the wall informing them of the place's 2011 "Loo of the Year" award. 3. Madonna Inn; San Luis Obispo, CA

Not only can you walk in the footsteps of Henry VIII and Anne Boleyn, but you can spend your first few minutes trying to find the hidden bathroom. In an effort to keep the secret we refuse to give away where it actually is. 5. Place de la Madeleine Public Toilets; Paris, France

Even a century of grime can't mar the beauty of the remarkable Art Nouveau facilities at the Place de la Madeleine. Dating back to 1905, this stunner of a lavatory is as worth checking out as any of the city's other more -- pardon the pun -- mainstream attractions. 6. Scholastica Baths; Ephesus, Turkey

The public toilets here not only provide a glimpse into la vie quotidienne of ancient peoples but also a highly unusual photo op as modern day visitors are welcome to take a seat on the no-longer functional commodes. 7. The Outhouses of Elk Falls; Elk Falls, Kansas

An annual contest taking place every November, this competition and tour features outhouses that run the gamut from greenhouse-like rooms to mini-movie theaters. A high-stakes operation, organizers offer a first prize of $60. 8. Opera Toilet; Vienna, Austria

Complete with operatic music, murals of the interior of the city's opera house-proper, show posters, and even stalls referred to as "loges," the Opera toilets are the next best thing to being there. 9. UFO Restaurant; Bratislava, Slovakia

Rest assured that although these urinals face large windows, there is just enough frosted glass to keep the view appropriate to the outside world. 10. Hundertwasser Toilets; Vienna, Austria

Dubbed the "Toilet of Modern Art" this is the second restroom in Vienna to make our list. Its randomly shaped tiles in bold primary colors make this playful room a fun alternative to the average dreary public toilet.