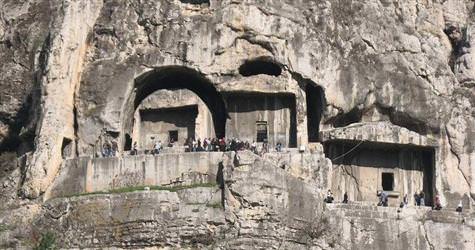 Visitors are being drawn to Amasya to see the approximately 2,100 year-old tombs of kings carved into the cliffs.

The stone graves belonging to the Pontic kings who ruled during the Hellenistic period have fast become the most visited location in the province.
The stone graves, carved out of the southern limestone skirts of the Harsena Mountain, are connected to each other through a series of stairs. According to records by the Amasya Department of Culture and Tourism the Stone Graves Site is the most visited by tourists in the province.
In the first eight months of last year, a total of 74,676 tourists purchased tickets, 4,522 of which were foreigners, to pay a visit to the Pontic tombs. The first eight months of this year saw 73,219 tourists visit and according to the Amasya District Department of Culture and Tourism Ahmet Kaya that figure is expected to reach 90,000 by the year's end.
Researcher and writer Hüseyin Menç mentions that there are 21 stone graves located along the Yeşilımak Valley, also referred to as the 'King's Valley'. Menç also mentions that the world's first-ever geographer Amasya's Strabo had states that 'Once upon a time, my country harbored kings.'