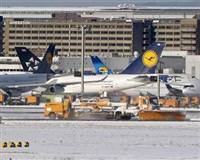 More snow ploughs, de-icers and staff. Like other airports in Europe, Frankfurt airport is anxious to avoid a repeat of last winter's snow chaos when about 5,000 flights were canceled.

"The orange armada," one member of staff at Germany's largest airport says proudly as we pass a row of bright orange snow clearing vehicles lined up at the edge of the Frankurt airport apron.

"We sat down with airports in Europe and also North America to discuss what to do," Schulte said. "Even if the winter is particularly hard, we should be prepared."

The new equipment and 450-person winter team mean two runways can be cleared at the same time within 30 minutes, down from 45 minutes last year, Schulte said.

"Of course, the winter's bound to be particularly warm now and then we'll be annoyed," he added.