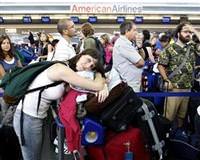 Last-minute flights and getaways are sometimes the way to go if your goal is to travel on the cheap. But when it comes to avoiding extra travel costs, it's planning ahead that's the guaranteed remedy. Online travel experts Cheapflights offers its top 10 budget busting travel mistakes for travelers to avoid.

Fliers nowadays aren't just dealing with the ever-ballooning baggage fees. They're also dealing with weight limits, which unfortunately have come down as the price of fuel has gone up. The penalty for going over weight is high enough that passengers are unloading clothes in the middle of airports just to beat associated fees. Beyond that, having more bags than you can carry leads to porter and bellboy costs every time you move from point A to B. Our tip: Plan your wardrobe ahead of time and pack versatile staples - like a black dress or nice pair of jeans - to save luggage space.

Exchange rates matter, so be sure to research the currency value of whatever country you're traveling to before making pricey flight decisions. Destinations in Canada, Australia and pretty much anywhere in Western Europe currently boast strong currencies, so instead of Paris, try Budapest; instead of London, try Prague; and instead of Vancouver, try Hanoi. Obviously swapping Canada out for Vietnam is a bit extreme, but it pays - literally - to know how much the Vietnamese Dong offers in getting the biggest bang for your bucks. Also, be smart about where you change your currency (not at the airport).

An amazing number of people don't check the forecast before taking off on a trip. The result: they end up the lucky owners of overpriced sweatshirts, flip flops and umbrellas. While an I heart London hoodie and Minnie Mouse umbrella may serve as lasting souvenirs, they can also burn up your pocket-change before you even leave the hotel lobby.

4. Keep in touch ... without the phone charges

Roaming, data chargers, third party carriers - there are as many ways to rack up extra costs as there will be zeroes added to your phone bill. But only if you aren't paying attention. Before departure, call your cell phone company to ensure you understand exactly what your provider charges its customers abroad. To avoid a devastating bill, upgrade temporarily to an international calling plan, use local Wi-Fi, invest in a SIM card, or - if you're really brave - leave your phone at home.

Tech-savvy travelers should write a checklist - whether on an iPad or pad of paper - of travel essentials. Free Wi-Fi at your local airport is useless if you've left your computer's adapter plugged in at home or the office. Catalog the items you use and their accessories to guarantee chargers, batteries, earbuds and other often-forgotten gadgets make it out the front door. Otherwise, you may find yourself taking a big bite out of your budget by paying airport prices for duplicate tech toys.

Cut costs on your next vacation by going off the beaten path or dodging your destination's high season. Push your ski vacation in British Columbia back to the spring and avoid January's packed mountains. Or take the kids out of school early in the year for a long weekend in Disney; the parks are significantly less crowded and nearby beaches offer just as much 80 degree charm as they do in summer months. With autumn around the corner, schedule an autumn foliage tour in North Carolina and skip the New England cluster. Savvy planning and a few pulled strings are all it takes.

7. Tips for service ... different in every country

Do your research and learn the customary tipping habits of whatever country you're visiting. Mexican servers expect a 10-15 percent tip for sit-down service, while in Fiji, tipping is discouraged and almost no one tips the bartender at pubs in Britain. Get the inside scoop on tipping, from bar tabs to safari day rates, from our how-to guide for tipping around the world.

A travel emergency, whether as simple as a canceled flight or as scary as a hurricane or heart attack, can simultaneously take the fun out of a trip and leave you with a massive bill. Protect yourself against unexpected hotel and transportation costs - or uncovered doctors or hospital charges - by investing in insurance. Don't know where to start? Check out our travel tip on buying travel insurance.

Stepping off a long-haul flight oftentimes results in stepping into an expensive form of transportation. If frugal travel is your priority, pass on the cab and opt instead for a form of public transportation from the airport. Research ahead of time - our flight guides are a good place to start - to identify what trains, trolleys, ferries and other modes of cheap transport could replace a high-priced taxi or private car service. In Chicago, for example, a metered cab costs passengers $35-40 to get downtown. A short ride on the "L" - Chicago's elevated train system - is only $2.25.

Though it's a hard commitment to make, loyalty to airlines, credit cards and hotels pays off. Make the effort to fly with a certain few airlines - typically the heavy hitters based at your local airport - and register as a frequent flier to qualify for free flights and travel savings. Also consider using credit cards linked to major airlines.