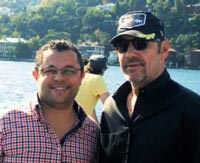 Hollywood stars flocked to Istanbul last week not only promoting the metropolis, but also put smiles on the faces of the city’s merchants. Kevin Spacey alone spent 500,000 liras in Turkey.

Istanbul, which has become a cultural, tourism and congress center, has now become a stomping ground for Hollywood stars.
However, it's not only stars from Hollywood that are flocking to Istanbul, the city is also drawing internationally acclaimed designers, architects, athletes, models and well pretty much anyone else that comes to mind. In fact there have been days when quite a few famous figures have congregated in Istanbul at the same time. Last weekend was just one of those times. Oscar award-winner Morgan Freeman spent approximately one week in Istanbul to scout locations for a film. One of the world's top ten supermodels, Adriana Lima was in town for a television shoot. Another Oscar-winning actor, Kevin Spacey came to Istanbul to perform the lead in William Shakespeare's famous 'Richard III' and stayed for ten days. Hillary Swank flew from Istanbul to a private party in Chechnya. Meanwhile, worldwide famous footballer Makalele's ex-wife and Cristiano Ronaldo's former lover participated in a runway show in Istanbul.

MERCHANTS ARE SMILING
It appears that the wave of glitterati visiting Istanbul will not remain limited to this past weekend… During the Feast of Sacrifice holiday, Ben Affleck will be arriving to Istanbul with his crew to film in the Grand Bazaar. In addition to upcoming projects by Morgan Freeman and Ben Affleck, the latest James Bond film will also be shot in Sultanahmet. This week, famous economist and writer, who is otherwise known as being the new queen of media, Arianna Huffington will be arriving to Istanbul for the Digital Age conference.