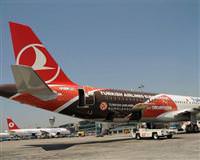 Libya's main international airport will reopen within a month and several international carriers have agreed to start flights again, the interim transport minister said on Tuesday.

Libya's provisional government took over Tripoli International Airport from a group of regional fighters on Monday as part of its efforts to consolidate control over strategic infrastructure.

"I would say international flights will start up again within a month," he said. "I expect that all of them will start by November."

Turkish Airlines is the only international carrier to have restarted flights out of Libya since rebel fighters seized Tripoli from Muammar Gaddafi's forces in August.

Both that airline and some domestic operators have been using a military airport in Tripoli.

A U.N. Security Council resolution on Sept. 16 eased some sanctions on Libya but kept the no-fly zone in place, despite calls from Russia and South Africa for it to be lifted.

However, the resolution did remove an obligation on all member states to deny permission to any aircraft registered in Libya, or owned or operated by Libyan nationals or companies to take off from, land in or overfly their territory.

The United Nations Security Council resolution imposed in March a no-fly zone for civilian flights over the country as part of international efforts to protect anti-government protesters under attack from Gaddafi loyalists.

Alfituri said the NTC transport authorities would still have to seek specific permission for every flight taking off and landing in the country.