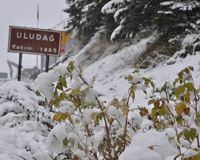 Uludağ, Kartepe, Kartalkaya and Abant have been transformed into winter wonderlands overnight. In Uludağ, snowfall has reached ten centimeters.

Snowfall has come early for some of Turkey's most popular winter tourism centers, such as Uludağ, Kartalkaya, Kartepe and Abant. The overnight snowfall on one of Turkeys most modern ski centers, Uludağ has brought smiles o the faces of hoteliers. Snowfall which turned Uludağ white overnight, reached ten centimeters.
Visitors who had arrived to picnic, took tours of Uludağ via chair lift. According to officials from the Uludağ Meteorology station, weather temperatures have dropped to zero and periodic snowfall is anticipated to continue until Tuesday. Located approximately 50 kilometers from Bolu, Kartalkaya also experienced its first snowfall for the season, reaching four centimeters.
At Kartepe, located in Kocaeli's Samanlı mountains, the heavy downpours which began the night prior and continued periodically has now transformed into snowfall, reaching four centimeters. One of Turkey's natural wonder holiday centers Abant also woke up to snow yesterday morning.