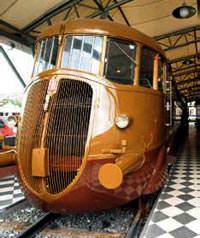 Thanks to Rahmi Koç’s efforts, the train commissioned by Italian dictator Benito Musolli and made by Fiat will be on display at the Koç Museum for the next ten years.

The La Littorina, a train built by Fiat for Italy's legendary dictator following World War One Benito Musollini in 1937 will be arriving to the Rahmi Koç Museum in May of 2012.
The train, which was purchased by Rahmi Koç's collector friend Mitchell Wolson was heavily damaged in the Katrina Hurricane at the museum it was on display. However now, after two years of deliberations and two months of travel, the La Littorina will be on display at the Rahmi Koç Museum for the next ten years. Tofaş CEO Ali Pandır stated that he was very excited to learn that Fiat had manufactured trains, which he found out through hearing about La Littorina and he is very excited to sponsor the event. Pandır also noted that they will continue to act as sponsors on similar projects.
POPULATION INSPIRED
With the increase in population, the Italian government requested Fiat build a train. Fiat then went ahead and successfully manufactured a coach that operated on tracks.