THY makes first flight to Tripoli 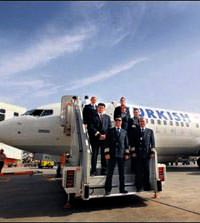 Turkish Airlines (THY) has flown the first scheduled passenger flight into Tripoli Airport since the start of the war.

The arrival of the 'Ordu' aircraft, which departed from Istanbul with 98 passengers, virtually marked the reopening of the Tripoli Airport to commercial flights once again.
According to the information obtained, the TK 635 flight Turkish Airlines planes were landing in the domestic Mitiga Airport, however as of today, THY planes will now be landing in Tripoli Airport every day of the week except for Friday.
With a decision made by the UN Security Council, the Tripoli Airport was shut to commercial traffic on March 18th. Certain areas of the airport were damaged in the war, however flights carrying the wounded were still allowed to depart.