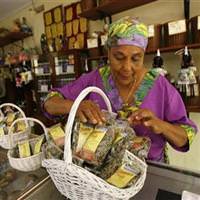 The second thing early explorers discovered about the Caribbean island of Curacao was the curative powers of its white beaches that revived ailing sailors.

The first observation, its natural harbor, was what made it a 17th century mercantile power and a UNESCO World Heritage site, one of six in the Caribbean.

Built by the Dutch in the mid-1600s, the capital Willemstad resembles Amsterdam with its quaint narrow alleys, gabled roofs and 17th and 18 century colonial buildings. Following its independence in October 2010, the island joined the Netherlands as a free nation.

Reuters correspondents with local knowledge help visitors make the most of a short stay on the island known for its world-class diving site and pristine beaches.

6 p.m. - Have an early dinner and try some Krioyo, a Creole blend of Dutch and Caribbean fare, at the Seaside Terrace restaurant, where the fish is served fresh out of the water.

9 p.m. - Head to the Mambo Beach Bar and Restaurant and dance the night away in the open air to live and recorded music. www.mambocuracao.com/

8:30 a.m. - Stroll through the Old City and eat fresh fruit from the floating market for breakfast. Be sure to cross the St. Anna Bay on the "The Swinging Old Lady," the Queen Emma pontoon bridge.

10 a.m. - Visit the Kura Hulanda Museum where you can descend into the hold of a slave ship. The museum examines the transatlantic slave trade that once made Curacao a wealthy island. www.kurahulanda.com

11:15 a.m. - Visit Mikve Israel-Emanuel, the oldest synagogue in continuous use in the Western Hemisphere. Don't forget to stop at The Jewish Historical Cultural Museum in the back, which occupies two buildings that date back to 1728. www.snoa.com

11:45 a.m. - Beat the local crowd to Marsche Bieuw, the Old Market Food Court that sits behind the Post Office. Order from any of the vendors and grab a seat at a picnic table before it gets too crowded.

1:30 p.m. - The Mushroom Forrest, one of the top 10 dive sites in Curacao, is a must see. It gets its name from the large number of mountainous star coral that grow vertically. The island has a variety of dive companies to help visitors explore the tropical waters. At Ocean Encounters, based at the Hyatt Regency hotel, there is a spa for non-divers and Camp Arawak for children to enjoy. www.curacao.hyatt.com

7:30 p.m. - Stop for dinner at the Cafe Gouverneur De Rouville. Sit on the balcony and taste a few of their 50 varieties of rum. Don't miss a local dish of cheese stuffed with chicken and prunes. www.de-gouverneur.com

10 p.m. - Walk to the Eetcafe Old Dutch, a local Old World pub for a late-night drink.

9 a.m. - Explore the island with Eric's ATV Adventures, a touring company that uses four-wheel all terrain vehicles for guided tours. Trips start every morning and afternoon and last about 3.5 hours. www.curacao-atv.com

1 p.m. - For a taste of South American food try El Gaucho, which cooks beef and local fish over an open flame. www.elgaucho.an

2:30 p.m. - Catch the sea lion show at the Curacao Sea Aquarium. The complex is described as one of the most complex in the world because of its "open-water-system" with seawater continuously being pumped into it. Visitors can snorkel or scuba dive to see the colorful inhabitants of the coral ecosystem. www.curacao-sea-aquarium.com

5 p.m. - Drive out to Westpunt, the wild west end of Curacao, and enjoy the arid scenery in the open country.

6:30 p.m. - Westpunt's Jaanchies Restaurant serves local food where the owner, Mr. Jaanchie, tells stories and recites the menu more than once. Try the iguana stew and goat meat and watch the beautiful birds while you wait.