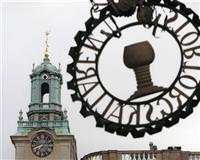 Got 48 hours to spare this winter in Stockholm, the stylish 700-year-old capital of Sweden, built on 14 islands with marvelous views? Reuters correspondents with local knowledge help visitors get the most out of a 48-hour visit. To dine out in the weekend, booking ahead is advised.

5 p.m. - Make your way through the winding alleys of the Old Town, one of the best preserved medieval cities of the world, to nearby Fjllgatan. From the small 18th-century street hanging on the edge of a cliff, take in spectacular views of the city and bays in all their splendor at dusk. Additionally, you are standing just a stone's throw away from the home of Lisbeth Salander, the fictional computer hacking heroine of Stieg Larsson's best-selling Millenium series.

6 p.m. - For more of those breathtaking views, pop over to nearby classic establishment Gondolen, which hangs in air over Strmmen bay, for an aperitif mixed by some of Stockholm's best bartenders. Ask someone to point out Nationalmuseum - behind it lays your dinner destination.

8 p.m. - Head to big buzzing bistro Blasieholmens Akvarium & Bar (or just B.A.R.) for dinner in a downtown metropolitan environment just behind the Nybroviken bay. Choose a set course or, even better, compose your meal from scratch, stepping up to the ice counter to pick your fish and have a chat with B.A.R.'s award-winning chefs.

11 p.m. - Wander a few blocks down grand seaside boulevard Strandvgen for a night cap at Hotel Diplomat, or if you are in the mood head to Stureplan square's chic nightclubs and bars such as Riche to party with the beautiful people.

9 a.m. - Start the day with a stroll among early-bird joggers, dogs and strollers down the Norr Mlasrstrand waterfront, on the Kungsholmen island, alongside the Riddarfjrden bay, past the magnificent City Hall, the venue of the yearly Nobel Banquet in December. If it's the summer season, climb the City Hall Tower.

10 a.m. - Unless you already popped in for breakfast or a latte-to-go at one of numerous Kungsholmen cafes, such as Petite France or Caffe Ugo, head over to Grand Hotel for brunch in style and settle down on a sofa at the Cadier Bar with panoramic views over the Royal Opera house, the Royal Palace and the Stockholm cathedral where Crown Princess Victoria married a former gym owner in 2010.

12 a.m. - It's time to take in some art. Head next door to Nationalmuseum with Sweden's top collection of older paintings and sculptures to enjoy works of the country's most prominent artists such as Carl Larsson and Anders Zorn. Or, pop across the little bridge over to the Skeppsholmen island and the Modern Museum. A recent addition to the Stockholm art scene is also contemporary photography museum Fotografiska.

3 a.m. - Laid-back Sdermalm, a former working class island that has become a cool bohemian neighborhood, is the place to hang out for the remainder of the day. In-between the foraging for cutting-edge fashion and trawling the designer boutiques and vintage record stores, sip espresso and eat cinnamon rolls at cool cafes while checking out the personal styles of some of Stockholm's hippest denizens. Pedestrian street Gtgatan is a good starting point to sight-see, make your way past the Medborgarplatsen square through the area around Sknegatan dubbed SoFo, toward pretty Nytorget square.

6 p.m. - As you will have noticed by now, the district is also filled with cool bars and cafes. Try Snotty's, Nada or Rival for a pre-dinner drink.

8 p.m. - Dine at popular restaurant/grocery store Nytorget Urban Deli or, should you lean more toward an old Stockholm classic, head for atmospheric, noisy Jugend style beer hall Pelikan for traditional Swedish home-style food and a "snaps" (shot of aquavit) with it.

11 p.m. - Still some energy left? Stay on in Sdermalm, head to cultural center Sdra Teatern, the bar at Marie Laveau or to rock establishment Debaser for live music.

10 a.m. - Check out the world's best preserved 17th century ship, Vasa, at the fascinating warship museum. The ship was salvaged 50 years ago after it sank on its virgin trip in the middle of Stockholm in 1628.

12 a.m. - You are already on the Royal Djurgrden island city park, Stockholm's large downtown green space, also home to a handful of eateries and attractions. Join the Stockholmers for a long Sunday stroll along the canal, across parkland and through forests.

2 p.m. - Stop for a light lunch amid the lush landscape and greenhouses of biodynamic open garden Rosendals Trdgrd. To see a real moose at close range and a selection of traditional buildings from across the country, visit the beautifully set open-air museum Skansen.

6 p.m. - End your weekend, and Djurgrden stint, with a traditional Swedish Sunday dinner at 19th century Villa Godthem, a classic restaurant of ancient lineage which re-opened under new management in 2011.

Alternatively, skip downtown. Put on your warmest woolly hat and head into Stockholm's 30,000-island archipelago for the day on the small regular passenger ferry which departs from the Nybroviken or Strmkajen quais.

The Fjderholmarna islands are just 20 minutes away, Finnhamn with open views over the Baltic sea is a spectacular two and a half hours ride out. Ut and Sandn are other great destinations.