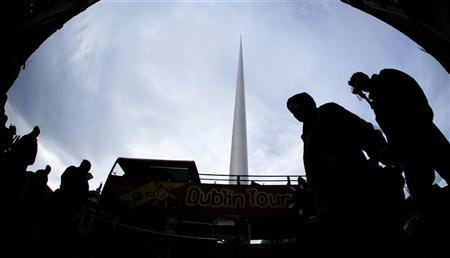 When the wind comes from the West, the smell of hops drifts across the city from the Guinness brewery, tempting Dubliners to stop for a pint of Ireland's favorite tipple.

It's famously difficult to resist the lure of Dublin's cozy pubs, which dot every corner of its winding, rust-red streets.

Yet there's much more to Dublin than that. Surrounded by countryside of outstanding beauty, Ireland's capital curves around a wide natural bay split through the middle by the peaty waters of the River Liffey as it flows down from the Wicklow mountains.

The Liffey has been called 'the Ganges of the literary world', owing to the capital's outsized literary clout. The city of 500,000 residents has produced James Joyce, Jonathan Swift and Oscar Wilde, none of whom are among the four other Dubliners who have won the Nobel Prize for literature.

Like its defining opus, James Joyce's "Ulysses", Dublin is a melange of carnality and fine art. At night, its streets can be a carnival of debauchery and drunkenness. But the city is also home to vibrant culture, an epic history, and a legendarily friendly populace.

7 p.m. - Choose a hotel in Dublin 1 or Dublin 2 postcodes, as near to the central boulevards of Grafton Street, Dame Street and O'Connell Street as possible. To ensure a decent night's sleep, avoid the Temple Bar area.

After checking in, head to The Bank bar on Dame Street. A former bank with a spectacular gilded interior, this is one of Dublin's jewels and a great place to acclimatize. It's also one of the few Dublin bars spacious enough to have a free seat on a Friday evening.

8 p.m - On your way to dinner, drop into The Porterhouse. A challenge to the Guinness brand's grip on the Irish market, this family-owned microbrewery prides itself on producing an original set of beers without using the chemicals found in mass-produced products.

9 p.m - Have a relaxing dinner at One Pico, a cozy restaurant just off St. Stephen's Green that is a consistent favorite with Dubliners, where star chef Eamonn O'Reilly whips up delicious dishes while managing to keep prices reasonable.

11 p.m - After the evening's show, the Gaiety Theatre transforms itself into a decadent, warren-like nightclub. The historic venue's backrooms, basements and lofts - in various states of splendid dilapidation - are filled with live bands and DJs and thrown open to partygoers until 3:30am.

10 a.m. Hire one of Dublin's public bicycles, available at 44 stations around the city centre, for a cycle along the Grand Canal. The tree-lined waterway, dotted with swans and colorful barges, will take you past some of the most picturesque parts of Dublin. Keep an eye out for the statue of poet Patrick Kavanagh on a bench on the south bank of the canal, according to the wish expressed in his poem.

11:30 a.m. - Turning left from the canal bank onto Baggot Street will bring you back to St. Stephen's Green, where you can leave the bicycle at a station and treat yourself to a relaxing brunch in the elegant Bewley's on Grafton Street, a popular cafe since its opening in the 1920s.

1 p.m. - A boutique tour of Dublin should start with the General Post Office on O'Connell Street, headquarters of the 1916 Easter Rising that led to the country's independence. Bullet holes from the uprising can be seen in the Daniel O'Connell statue at the head of the street.

1:30 p.m. - A few paces away is Trinity College, Ireland's most prestigious university. 200,000 of the university's oldest books, including famous 9th century illustrated manuscript The Book of Kells, are well worth a visit and are on display to the public in the Old Library.

2.30 p.m. - Adjacent to the university is Ireland's national museum. A 4,500 year old boat, a tomb, and several preserved bodies from the country's ancient Celtic past are on display, alongside intricate gold and silver treasures.

4.30 p.m - The tour should finish with Dublin's oldest building - Christ Church cathedral. The church has a stunning carved interior, and among other curiosities its medieval crypt houses a mummified cat and rat known locally and "Tom and Jerry".

5:30 p.m. - A stroll down Fleet Street, under Merchant's Arch and across the Halfpenny Bridge over the Liffey will bring you through Temple Bar to the Winding Stair restaurant in time for a pre-theatre meal. Located above a vintage book shop, the gourmet restaurant offers simple and delicious Irish food and great views over the river.

7:30 p.m - Ireland's national theatre, the Abbey became the centre of the Irish literary renaissance when it was founded by poet W. B. Yeats in 1904, and is still a hub for new writing. A visit is a wonderful opportunity to see classic Irish plays in the theatre in which they were first conceived.

11 p.m - Little changed since the 1880s, the wooden partitions of the Palace Bar on Fleet Street are designed for conversation. Headquarters for the Dublin literati for over a century, it's the perfect place to dissect the flaws and virtues of the evening's performance. Nobel laureate poet Seamus Heaney, with his puff of white hair, is one conspicuous patron.

11 a.m. - Grab a coffee and a pastry in one of the many pavement cafes just west of Grafton Street. Take a browse in the gothic indoor market George's Street Arcade, and then select some picnic materials in delicatessen Fallon & Byrnes.

12:30 p.m - Take the metropolitan train service, the Dart, from Tara Street station to Howth. The 30 minute journey will take you the wild hill that forms the northern arm of Dublin bay.

The train pulls into the picturesque fishing village and harbor of Howth. Following the walking trail around the cliffs will take you to secret beaches inaccessible by road, and offers wonderful views of Dublin. Winding and overgrown paths bring you to the summit of the hill, where an ancient signaling point offers Dublin's most spectacular view above Howth Castle - a great place for a picnic.

On a clear day you can see the Mountains of Mourne in Northern Ireland, and even glimpse the top of Snowdon mountain in Wales. Sensible walking shoes are required.

6 p.m. - An early dinner in Aqua restaurant is recommended. The glass-walled restaurant is located on the tip of Howth pier as it juts out into the Irish sea, and the view of the islands and seashore is terrific at sunset.

8 p.m - The Bloody Stream pub, underneath the train station, is a great place to finish your weekend in Dublin. There is live traditional Irish music on Sunday nights, good Guinness and a great atmosphere. As a bonus, Howth is closer to the airport than the city centre, it's just a 20 minute taxi drive away.