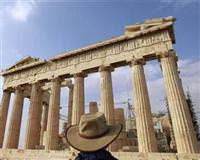 At the end of a sunny day on the Acropolis last month, Svein Davoy gazed awe-struck at the columns of the Parthenon gleaming in the twilight.

"It's marvelous. This is where Western civilization began. I will certainly tell my friends to come to Greece and see all this," enthused Davoy, 63, an economist from Norway.

Davoy was luckier than he realized. The union representing security guards at museums and archaeological sites very nearly shut down all Greece's monuments in November in a dispute with the culture and tourism ministry over overtime pay.

Greece's debt crisis has badly hurt tourism -- forcing visitors to clamber over fences to see closed monuments or curtail trips to avoid strikes and unrest, endangering new cultural initiatives and even raising concerns about the security around some of the country's most precious archaeological sites.

Culture and Tourism Minister Pavlos Yeroulanos has said the government is doing its best to protect Greece's heritage.

But the ministry has had to axe 2,000 staff since the debt crisis broke in 2009, mostly people on temporary contracts, and this has taken its toll, especially on smaller museums, forcing some to shorten their opening hours, for example, he said.

"We have seen a 35 percent cut in our budget since 2009, forcing us to do more with much less... and to set new priorities," Yeroulanos told Reuters in an interview.

He said tourism is still expected to rise by 10 percent this year from 2010, adding "an extra one to 1.5 percent to our gross domestic product." The Arab Spring revolts have diverted some tourists from Egypt and Tunisia and more visitors are arriving from newer markets in Asia, Russia and Israel.

Denied the option of devaluing its currency in tough times as a member of the euro zone, Greece remains relatively expensive compared with rivals such as Turkey, even after four years of wrenching recession.

With tourism accounting for a whopping 18 percent of total GDP, it can ill afford the negative publicity that several years of frequent -- and occasionally violent -- mass protests and strikes have brought.

The National Archaeological Museum, one of the top attractions in Athens, had to operate with just 30 percent of its staff during the busy summer months, said Yannis Mavrikopoulos, head of the security guards' labor union.

"It made us a laughing stock internationally. Visitors paid to see all of the museum but only a third of it was open."

Security is another concern, said Despina Koutsoumba, head of the Greek archaeologists' association.

"Every six months the culture ministry announces to great fanfare that they have foiled another plot to smuggle ancient artifacts out of the country," she said.

"But we know that for every one arrest they report there are 20 others that get away with it because of fewer security guards as well as shortages of police and port authority officials."

With funds for research cut back to a minimum, some of Greece's brightest archaeologists are leaving to find work in western Europe, Cyprus or Turkey, she said.

Koutsoumba and her colleagues have seen their salaries cut by 30 percent or more since the start of the crisis.

In its rush to attract new foreign investment in its effort to avert national bankruptcy, the government risks allowing over-hasty construction of roads and hotels that can be damaging to Greece's archaeological heritage and environment, Koutsoumba said.

Under Greek law, archaeologists must carefully excavate, record and preserve the ancient artifacts that are regularly uncovered during routine construction of roads or buildings.

"Because of the economic pressures (to build and develop) we have had to learn to dig much faster," she said.

Greece's visual and performing arts -- an increasingly important part of its tourism strategy before the crisis -- has suffered even more than the archaeological sites and museums which account for 80 percent of the culture ministry budget.

"There were efforts before the crisis to show Athens is not just about famous landmarks but is also a culturally vibrant modern city," said Augustine Zenakos, co-founder of the Athens Biennale that promotes contemporary visual art and design.

"The Biennale was very much part of that effort... but that is all pretty much over now," he said, adding that artists taking part in this year's event were having to cover most of their own costs.

"We understand that tourism is a priority... but we have to take action when they tell our members to work more without being compensated adequately," said Mavrikopoulos.

Although smaller provincial sites have taken the brunt of the cutbacks, even showcase projects such as the two-year-old Acropolis Museum are feeling the chill.

"We planned to run our new museum only from the income we generated from our ticket sales, our shops and other facilities and for now that is the case," said Professor Dimitris Pandermalis, rector of the museum.

"But it is not easy. In future we may need support from the state, at least to pay salaries... Yet at times of crisis like this, people need culture, museums, more than ever, to have a different dimension to everyday life."