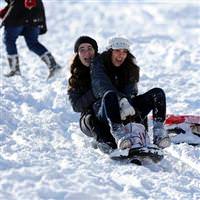 Snowfall has reached 40 centimeters at Uludağ, one of Turkey’s prime winter destinations.

According to information obtained from officials at the Uludağ Meteorology Station, in the early morning hours, measurements taken in the hotel district of Uludağ showed depth of snowfall to be at 30 centimeters. Even though temperatures are still at minus zero degrees, the snowfall which started yesterday in Uludağ came to a halt overnight.
Meteorology officials predict snowfall may resume tonight. With partial cloud coverage, the range of visibility in Uludağ is strong and therefore despite the 40 cm snowfall, vacationers are able to enjoy skiing.