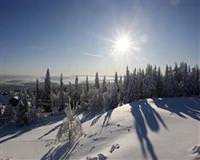 Oslo dresses up in white lights ahead of Christmas but keeps the spirit of the season partly under wraps as befits a reserved Nordic capital with a winter shroud of darkness and some of Europe's highest food and drink prices.

Norwegians are a bit preoccupied with home and hearth in December, and many hotels close from December 22 until after New Year's. But this city founded a millennium ago puts out a surprisingly warm vibe in the snow.

7 p.m. - Next door to the Grand, check off some holiday gift-buying at the century-old Freia chocolate shop.

11 p.m. - Walk east past Parliament to a pedestrian-only stretch of clubs, pubs and casual eats, dodging blue-fingered accordion buskers in the lee of Oslo's Lutheran cathedral. At the Oslo S station, about-face and repeat.

9 a.m. - Hop a tram or taxi (10 minutes from National Theatre) to Vigelandsparken to stroll among 192 bronze and granite human figures of every variety sculpted by Gustav Vigeland.

11 a.m. - Walk northeast on Kirkeveien, then right on Bogstadveien (which becomes Hegdehaugsveien) for a stroll past expensive luxury boutiques and department stores. Shop!

When the street ends, bear right and enter the northeast corner of the Royal Palace Park as if you owned the place. Admire the plumed officers of the King's Guard, who make sure no one bothers the actual residents: King Harald and Queen Sonja.

1 p.m. - Descend the stairway behind the National Theatre, stash your bags at the hotel and head up Universitetsgata to St. Olavs gate 2 for lunch at Cafe Tekehtopa, an old apothecary whose shelf of remedies now includes beer and wine.

2 p.m. - At Universitetsgata 13 is the National Gallery, offering a version of Edvard Munch's "The Scream" and works by other modernists and Norwegian landscape artists.

3 p.m. - Beeline over Spikersuppa to Oslo's chunky City Hall. Note the intricate brickwork, scan the wooden friezes and duck in where the Nobel Peace Prize was awarded on December 10 before rounding the building to behold the Oslo Fjord, with ferries to everywhere.

At right is the Nobel Peace Prize Museum and a wharf area restored for shopping and dining. Head left to Akershus Fortress, whose oldest stonework dates to the 13th century.

5 p.m. - Onward to the city's stunning new waterside Opera house clad in white Carrara marble. It's only 10 or 12 blocks away, but you're at 60 degrees latitude, so why not hail a cab?

8 p.m. - Some 500 Norwegian crowns ($85) gets you a December specialty -- lutefisk, or lye-soaked cod topped with mustard and bacon fat, come back for as many servings as you like...if you like it.

Gamle Raadhus (+47 22 42 01 07) and Engebret Cafe (+47 22 82 25 25) do it right and their seats are always filled. But there's lutefisk all over town. Seasonally brewed Christmas ale as well as the traditionally flavored and powerful aquavit spirit should be close at hand.

9 a.m. - Early mariners knew the Oslo region as "Viken", which may be how the Vikings got their name. The Viking Ship Museum, 15 minutes from National Theatre on the No. 30 bus, brings alive this most dramatic chapter of history.

12 noon - On return to Karl Johans gate, take a snack at Spikersuppa or light lunch at United Bakeries. Then pick up some wintry outerwear at the Helly Hansen (Karl Johans gate 3) or Norroena (Akersgata 30) flagship stores and head for Oslo's North Woods in a "Frognerseter" Metro car from National Theatre.

For bragging rights, you see, visitors must venture to the heights. It's only 20 minutes off, but squint and it looks like Norway's rugged interior. (For the snow report: +47 22 92 32 00)

2 p.m. - For alpine skiing or snowboarding get off at Voksenkollen station and shuttle to Tryvann Tower (for the view) and Tryvann Vinterpark, a resort with snow-making machines, 11 lifts and 18 slopes up to 1,400 meters in length.

Hop off the Metro a bit lower down, at Frognerseter, and you can rent a toboggan from the sleigh association (+47 22 49 01 21). Its 2 km Corkscrew run, parallel to an Olympic bobsled track, requires natural snow.

6 p.m. - Dinner at Frognerseter, a log lodge from 1867 with Dragon-style touches. Its informal Cafe Seterstua offers sandwiches and meatballs. For venison, ptarmigan or salmon served under a chandelier try the lodge's Finstua (casual clothes are fine, but reservations are advisable: +47 22 92 40 40).