Eros’ head to be returned 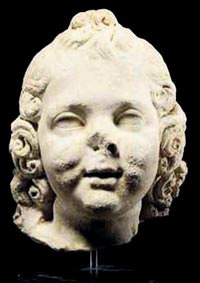 After two and a half years of negotiations, an agreement has finally been reached in principle for the return of the head of a child Eros from Sidamara Lahti to the Istanbul Archeology Museum. The sole obstacle remaining is Britain’s demands to classify the item as being ‘returned’ rather than ‘stolen’.

The piece in question was broken off from Sidamara Lahti, a tomb from the 1700's. It presently sits in storage in England's Victoria-Albert Museum, however will soon be returned to Turkey. The piece, which depicts a child's head with curly hair, is thought to be that of Eros, whose 25 ton tomb is currently on display at the Istanbul Archeology Museum, missing the aforementioned piece. It is thought that in 1882, the British Consul General at the time, Sir Charles Wilson, may have removed the head of Eros and then taken it with him to England. One hundred and thirty years later, the piece will soon be returned to complete the ancient tomb on display. Discovered as being stolen in 2009 by Dr. Şehrazat Karagöz the Ministry of Culture and Tourism has been fighting for the return of the curly haired- boy's head for two and a half years now. Correspondence between the Department of Cultural Assets and Museums and London's Victoria and Albert Museum have been following a positive course. Officials state that an agreement in principle has been reached for the return of the marble boy's head, however they are still working out the details of the conditions of the return. When finalized, the piece will be brought back to Turkish soil, which is anticipated to transpire in the next few days.

NO CONCESSIONS
It turns out; there are reservations in regards to the conditions of the items return. The museum in England does not want the item to be categorized as having been brought to England 'illegally' 130 years ago. Turkey meanwhile, emphasizes that there will be no concessions made on the matter.
CONSUL-GENERAL BROUGHT THE PIECE TO ENGLAND 130 YEARS AGO
Considered one of the largest tombs in the world, Sidamara Lahti was find in 1879 by Wilson in excavations conducted in Konya-Ereğli. In 1882, Wilson supposedly broke apart the child figure's head and transported it to London.