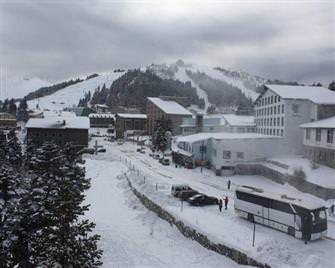 New Year’s Eve accommodation packages at hotels in Uludağ are whistle-blowing high. The price for a two-night vacation is more than three months of minimum wages.

Vacationers wanting to usher in the New Year in Uludağ have filled the skiing center's hotels despite the high prices for accommodation. The early snowfall in Uludağ, one of the most active spots to celebrate the New Year, has hotel operators smiling.
Despite the increase in prices for accommodation compared to last year, hotels have filled with New Year's Eve reservations. With Burcu Güneş performing on New Year's Eve, the price for a two-person bedroom at the Grand Yazıcı Hotel is 900 TL. Fedon performs at the Ağaoğlu Hotel where all-inclusive accommodation for two people for two nights is 1,840TL. Kervansaray Hotel's New Year's Eve program has singer Tuğba Ekinci performing. The price however for two to stay for two nights at the Kervansaray is 2,020 TL. While Karina Hotel is offering overnight stays for two at 495 TL, for two to spend two nights at the Atasu Hotel it will cost 2.600 TL.
While there will not be charges for children up to the age of six, the price range for rooms in hotels for January will range between 130 and 200 TL for weekdays and between 150 and 250 TL for weekends. A total of 27 hotels in Uludağ with an approximate combined capacity of 5,000 people will be hosting both domestic and foreign tourists throughout the season. With eight chairlifts and seven teleskis, Uludağ is one of the leading skiing centers in Turkey. In addition, there is both cable car and highway access to Uludağ from the city center.