An influx of tourists in Cappadocia 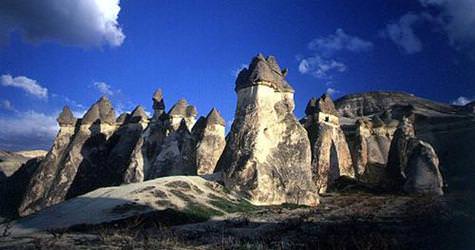 Cappadocia, one of Turkey’s most significant tourism centers known for its fairy chimneys, churches and homes carved from stone, had over 2.5 million visitors in 2011.

According to information from the Nevşehir Cultural and Tourism Department, the number of visitors at the museum and ruins opened to the public by the Ministry of Culture and Tourism reached a total of 2,511,955 tourists, of which approximately 1.6 million were foreigners, in the January to December period of 2011.

During the same time frame last year, a total of 2,182,970 tourists visited the region; 1,492,966 of which were foreigners and 690,004 who were domestic visitors.
Amongst a list of the most highly visited sites in the region, the Göreme Open Air Museum, Kaymaklı Underground City, Zelve and the Paşabağları ruin sites took the top spots.
In addition, the Mustafapaşa, Gülşehir Açıksaray, Çavuşin, El Nazar, Karanlık and the Gülşehir St. Jean churches, the Nevşehir, Ürgüp and Hacıbektaş archaeology and ethnography museums, the Hacıbektaş Atatürk Home, the Hacıbektaş Veli Museum and the Külliyesi, Derinkuyu, Tatlarin and Özkonak underground cities are all open to both Turkish and foreign tourists.

Revenue from ruins also on the rise
According to Nevşehir Governor Abdurrahman Savaş, the increase in tourist numbers was especially evident during the spring and August months and in line with that increase there has also been a rise in returns.
The combined annual revenue acquired from the region's ruin sites and museums is ten million liras on average. Governor Savaş explained that there was a slight increase in the average escalation of revenue, and emphasized that a rise was also evident in the number of facilities geared towards tourists, who tend to bring in more foreign exchange to the region.
Savaş also added that although they expected a 20 to 30 percent increase in tourism in the Cappadocia region, due to the expanding crisis in Europe, the natural disasters in the Far East and the internal strife experienced in Arab nations, this year, tourism figures increased by just 15 to 20 percent.