Turkey has the best skiing centers! 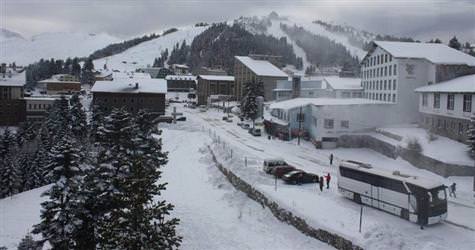 Snow depth in both Kartalkaya and Uludağ have reached 170 centimeters, snow depth in Bayraktepe is at 110 cm, while in Palandöken 55 cm, Saklıkent fiver meters and in Davraz snow depth was measured at two meters.

With intermittent snowfall, snow depth in Palandöken is said to have reached 55 centimeters.
Tourists from Iran, Russia and Ukraine are enjoying their time skiing in Palandöken.
While all runways and lifts are open, hotel capacity at Palandöken's Palan and Dedeman Hotel is at 50 percent, while Xanadu is stated to be 35 percent full.
Dedeman Hotel Manager Nuri Avşarer explains that snow depth on all of the runways is at the desired level and that the hotel is currently hosting tourists from Iran, Russia and Ukraine.
Avşarer states, ''There is especially high demand during the semester break and with the reservations we have received thus far for that period, our hotel has filled 80 percent of capacity."

The Bayraktepe Ski Center located in the Sarıkamış district of Kars is currently seeing a snow depth measured at 110 centimeters. Çamkar Hotel General Manager Kamuran Eroğlu states that after the snowfall. They used snow-leveling machines to ensure the areas are all in an ideal state for skiing, and also added that their center is filled with domestic and foreign tourists. Explaining that they try to ensure that ski-lovers spend the day skiing and in the evening enjoy night-time entertainment programs, Eroğlu states, ''In the upcoming days, we will be organizing a night time walk with torches and a barbeque with mulled wine."
Meanwhile, well-known football commentator Erman Toroğlu has also been enjoying his time skiing at the Bayraktepe Ski Center, having arrived to the county to visit his son Firat who is doing his national service in Sarıkamış. Explaining that he is amazed by the ski center, Toroğlu stated, 'This is an unbelievably beautiful and natural place. This is my first time. If I go skiing again, I will come here because it is like heaven and the surroundings are very nice."
Out of the hotels at the ski center, the Çamkar Hotel is at 90 percent, the Ce-Mar Toprak Hotel is at 80 percent, the Kar Hotel at 70 percent and the Alpina Residences are at 60 percent capacity.

At Kartalkaya, one of Turkey's most important winter tourism centers, snow depth has reached 170 centimeters. After the three days of snowfall seen in Bolu, Kartalkaya's snow depth reached a whopping 170 centimeters. Intermittent snowfall continues to be seen at the ski center. During the week, the hotels in Kartalkaya operate at between 80 to 95 percent capacity, while on the weekends they can reach up to 100 percent.
While reservations continue to come in to the ski center for the semester break, this center offers the possibility to ski on the Kartalkaya hotels' approximately 45 kilometer ski area.
Grand Kartal Hotel General Manager Halit Ergül explains that they continue to see intermittent snowfall, "Right now, snow depth in Kartalkaya has reached 170 centimeters. Holiday-goers are enjoying the snow and skiing to the full extent. This season, Kartalkaya is seeing great interest from vacationers."

In Antalya's Saklıkent Ski Center snow depth has reached five meters while in Isparta's Davraz Ski Center, snow depth was measured at two meters.
The Saklıkent Ski Center, which is located 45 kilometers from Antalya's city center and 55 kilometers from the airport, is currently experiencing heavy snowfall.
With a 65-bed capacity hotel and a 1,300 meter-long chairlift and a 700 meter-long teleski, snow depth in Saklıkent's hotel district has reached two and a half meters and five meters depth in ski areas.
Saklıkent Ski Center Operations Manager İsa Alemdar states that they are currently experiencing the best snowfall they have seen in Saklıkent since 2004.
Explaining that the ski areas and facilities are fully ready for winter, Alemdar states, "All roads to Saklıkent are open. However, due to the constant snowfall, our visitors should not hit the road without snow chains. We have regular weekend transportation services and if needed we can also provide services during the week."

After experiencing heavy snowfall, the Davraz Ski Center, located approximately 26 kilometers from the Isparta city center, is awaiting ski-lovers, with snow depth measuring up to two meters.
According to Davras Sirene Hotel Sales Marketing Manager Emre Koçum, snow depth at the first chair lift point is at 170 centimeters, while at the second chairlift point has reached two meters. Explaining that hotels have reached a 30 percent full capacity, Koçum states that it is now possible to ski on all of the runways.

At the Hazarbaba Ski Center in Elazığ snow depth is stated to be at 150 centimeters and the ski runways are extremely suitable for skiing.
The ski center, located on Hazarbaba Mountain, has a view of the Hazar Lake and a runway reaching 1,300 meters-length. The center also offers visitors the option to rent ski gear.
Erciyes

In Erciyes, ski depth has been measured at approximately 50 centimeters. According to officials from the Youth Services and District Sports Department for Erciyes Facilities, snow depth has been measured at 50 centimeters and the ground and weathers conditions are conducive for skiing.
Officials state that the chairlifts and teleski facilities are in operating condition and intermittent snowfall continues.

In Kocaeli's Kartepe Ski Center, snow depth is stated to have reached 120 centimeters.
Kartepe, located in the Samanlı Mountains, which boasts a 1,500 elevation peak, and is south of İzmit, has a snow depth of 120 centimeters and 17 ski runways which are open.
Capacity at The Green Park Kartepe Resort Hotel has reached 45 percent and is expected to reach 98 percent over the weekend.