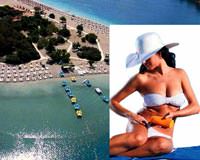 Turkey has surpassed the 2011 tourism target to reach a record breaking 9.86 percent increase in numbers of visitors. Out of the 31.5 million tourists that came to Turkey, the highest number of visitors were from Germany. Istanbul alone drew in eight million tourists last year.

Turkey has broken yet another record while surpassing the 2011 target of 31million visitors, with a 9.86 percent increase in tourists for the January to December period in comparison to figures from the year prior.

As a result, Turkey hosted a record 31,456,076 visitors in 2011. Out of that figure, 2.11 million (6.92%) were day trippers. December alone showed a 2.47 percent increase, with 1,194,729 visitors. As for the order of nations who comprise Turkey's tourists, tradition was not broken. Germans made up the highest number of tourists hosted in Turkey this year accounting for five million.

According to figures released from the Ministry of Culture and Tourism, Germany came in first in terms of nationalities of tourists visiting Turkey with 4.83 million (15.34%), the Russian Federation follows in second with 3.47 million (11.03%), England came in third with 2.58 million (8.21%). Following England in subsequent order was Iran, Bulgaria, Holland, Georgia, France, Syria and the United States.

As for the locations in Turkey which saw the highest number of arrivals, Antalya came in first at 33.27 percent, followed by Istanbul in second place at 25.61 percent and Muğla in third at 9.78 percent.

The number of countries to send over a million tourists to Turkey has gone up to eight. In 2011, the most significant increase in numbers of tourists sent from a particular country was Bangladesh with a 181.64 percent increase. Israel suffered the highest drop in numbers of tourists to visit Turkey with a decrease by 27.76 percent in 2011. Meanwhile, the United States replaced Italy last year in becoming one of the top ten nations whose tourists came to Turkey. In 2011, over 757,000 American tourists came to Turkey.