Winter is something else in Cappadocia 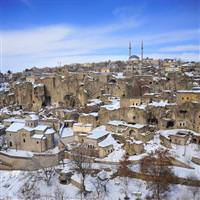 Domestic and foreign tourists that arrive to Cappadocia in winter have the rare chance to see its unique skyline peaks covered in snow.

The Cappadocia region, one of Turkey's most important tourism centers, known for its fairy chimneys, has become a favorite place to take a hot-air balloon ride. Winter offers an even more unique view as from the sky, visitors can witness a view of the region's fairy chimneys and unique landscape covered in snow. Tourists are now making Cappadocia one of their must-see destinations and the cold weather is not at all a determent for the opportunity to see the region's breathtaking landscape covered in snow.


One of the hot balloon operators that offer tours of the region, Cappadocia Voyager Balloons Pilot Mehmet Halis Aydoğan explains that instead of being cold, once the hot air balloon elevates, temperatures begin to warm up and passengers don't really feel cold, therefore they see a higher demand of hot-air balloon trips during the winter months. "In the winter, the ground is very cold. You can feel this for 100 to 15o meters above the ground. However once you head into the sky, the cold air from the ground dissipates. Of course, there is also the heat factor from the balloon. The balloon flies with the wind, however passengers riding it only feel the wind if it is particular heavy," states Aydoğan. "When everywhere is covered in snow, it provides a beautiful combination between the fairy chimneys and valleys as well as the Erciyes Mountain. Everywhere looks magical, which is a site that deeply affects visitors in Cappadocia in winter.

Although the numbers of hot-air balloons that operate in winter are less than the numbers in summer, the interest in this unique activity does not appear to wane, with tourists from the Far East showing the most demand for these unique tours. However, it is April to October when they see the highest number of tourists flock to the region, with over one hundred hot-air balloons embarking every day," explains Aydoğan, who goes on to state:

''Despite the decrease in numbers of visitors in the region from October to April, the interest in taking hot-air balloons is high. According to weather conditions, there are approximately 25 trips a day. Visitors from the Far East show the most interest, with Japan taking the top spot, followed by visitors from Korea, Taiwan, Singapore, Malaysia, Indonesia and China. They have vacation time in the end of January to February and they take advantage of that."

According to the Göreme Tourism Development Cooperative Chairman Mustafa Durmaz, during the winter months in which Cappadocia tourism is usually slow, the interest in balloon trips enlivens the region. Durmaz explains that the views on a hot-air balloon ride in winter are something worth seeing and tourists have caught on to this and states that the cold weather doesn't bother tourists whatsoever. Durmaz also states that at present, they are mainly hosting German, French and Korean tourists.
Durmaz also emphasizes that the views from the sky of Cappadocia covered in snow is mesmerizing for foreign tourists and the snow and the cold weather isn't an obstacle for hot-air balloon rides whatsoever.