Turkey is fourth in the world for Blue Flag beaches 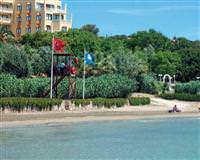 Turkey has now placed fourth for nations with the most Blue Flag beaches, a certification of high importance at the international level for tourism.

The Blue Flag system, which is increasingly becoming a symbol of high standards in the domestic and international arena, is also of utmost significance for nations that want to have a piece of the tourism pie.

In 2002, Turkey had 127 Blue Flag certified beaches. In 2011 that figure increased to 324 making Turkey the fourth country to have the highest number of Blue Flag beaches in the world.

In the top three, were Spain, Greece and France. While Antalya has the highest concentration of Blue Flag beaches in Turkey, Muğla and İzmir closely followed.

According to a booklet prepared by Turkey's Environmental Education Foundation (TÜRÇEV), entitled "Blue Flag certified beaches, marinas and yachts 2011", the number of beaches that receive certification each year has been on a steady rise since 1993. The increasing presence of Blue Flag certified beaches and marinas in the global tourism market, has developed a competitive environment at equivalent standards.

The Blue Flag program, which was first started in France in 1985, is conducted through TÜRÇEV in Turkey.

Becoming Blue Flag certified is based on 32 criteria, from categories entitled; water quality, environmental education and information, environment management, security and services. Certified beaches have Blue Flags waving along the beach through the swimming season (when tests are conducted).

Beaches and local administrations that want to apply for Blue Flag certification may do so by obtaining information and filling out the form located on the ''www.mavibayrak.org.tr'' website. The website also lists in detail the criteria the certification is based on.


COUNTRIES AND THEIR NUMBERS OF BLUE FLAG BEACHES (NORTHERN HEMISPHERE 2011)


NUMBERS OF BLUE FLAG BEACHES BASED ON YEARS