Antalya is destination of choice for Russian tourists 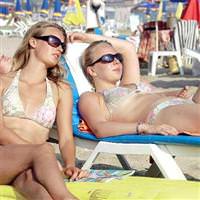 According to a survey conducted by a Russian tourism agency, which questioned 8,000 Russian tourists face to face, Turkey is considered the most desirable destination to live by Russians.

Andrey Baranov, the owner of Russia's Mobaly Tourism Travel Agency, states that according to a survey they conducted with 8,000 Russian tourist participants they sent on vacation, Antalya is the top destination in Turkey where Russian tourists would like to live. According to the survey, which was conducted through a series of questions posed to participants face to face, 86 percent of Russians responded that they would want to reside in Antalya's Kemer, Alanya and Manavgat counties or the town of Side, whereas 29 percent said they would like to live in Bodrum or Marmaris.

Baranov also noted that 89 percent of the Russian tourists questioned stated that they perceived Turkey as being the safest country in the world. Following Turkey, the participants questioned mainly listed India and Far Eastern nations as their second and third preferences respectively, for places to live.

Baranov explains that ten years ago Russians primarily dreamed of vacationing in Antalya, however in 2012, this dream has now transformed into one which includes making money and then buying a house in locations such as Alanya, Kemer and Side.

Baranov states, "The Russian tourists' dream of and passion for vacationing in Antalya has now shifted towards an interest in purchasing real estate. Those Russians questioned that are well off and based in Moscow and St. Petersburg expressed intentions to buy a home in destinations such as Alanya, Kemer, Kaş, Bodrum, Belek, Kalkan, Manavgat, Marmaris and Side in order to spend three months a year in Turkey. Alanya and Kemer are the most desirable locations in terms of home purchases with the high number of Russian residents in both Kemer and Alanya being an influential factor.

According to Baranov, due to the elections in Russia being held prior to the start of the season, they are expecting to see a seven percent increase in tourists that visit Antalya. Baranov also noted that they are not considering sending tourists to Egypt or Tunisia until they have made a full transition to democracy.
Asım Baştuğ, a real estate consultant for Russian tourism specialists Zeyma, states that Alanya is the number one destination where the majority of Russians have purchased homes. According to Baştuğ, there are 5,200 Russians residing in Alanya. Baştuğ also stated that there has been a lot of interest expressed from Moscow and St. Petersburg from their internet promotional efforts conducted in Russian. Baştuğ explains that when a Russian tourist sees a villa they like over the internet, they fly into the Antalya Airport where they are greeted and then shown the property in person. Baştuğ also notes that Russians are extremely selective when it comes to real estate purchases.