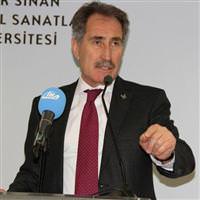 Minister of Culture and Tourism Ertuğrul Günay recently announced that they are expecting over ten million tourists to visit Istanbul in the near future.

Speaking at a press conference at the TİM Maslak Show Center to promote the June 9th start of the 'Istanbul Shopping Fest', Minister Günay stated, "Hopefully in the near future, we will be able to ensure that over ten million foreign visitors leave Istanbul smiling after experiencing the city's culture and history. Our ten million tourist goal for Istanbul is just our minimum." As for the upcoming Istanbul Shopping Fest, Günay explains that last year they started off with an amateurish excitement, whereas this year, the event is anticipated to be much more enjoyable and to have many more participants.

Reminding that during last year's Istanbul Shopping Fest, which lasted for 40 days, there was an approximate 25 percent increase in shopping; Günay states that the increase in the usage of foreign bank cards was up to 38 percent higher compared to figures from the year prior and, the Minister of Culture and Tourism mentioned that they are expecting even higher figures this year. Günay also expressed that in addition to Turks benefitting from these events, they also want those who live in the nearby geography to enjoy the benefits. Günay explained that just like last year, the Ministry will do all they can to promote the Istanbul Shopping Fest event in surrounding nations. Last year there were visitors from Iran, Azerbaijan, Russia, Kazakhstan and the Middle East, says Günay who goes on to mention that the Ministry will be exerting additional effort this year to provide transportation options to Istanbul.

-Istanbul is a center of civilization-

Emphasizing that he believes it is extremely important that Istanbul be known as a shopping desrination, Günay went on to state the following: ''Certain provinces were impressed by Istanbul's success last year and embarked upon doing the same themselves. However they have an excellent idol to look up to, they are competing with Istanbul. However, Istanbul competes with the world and is trying to beat it. While Istanbul renews and modernizes itself on the one hand, it must also ensure it does not destroy its historical and natural structure. As we try to draw people to our shopping centers from all over the world, we must at the same time recover Istanbul's traditional shopping centers such as the Grand Bazaar and the Spice Market and familiarize our own people and those who travel here from all over the world with these unique sites. We have to reincorporate these locations into the Istanbul lifestyle. It is then we will be able to transform this city into one which is special and significant not only for its modern shopping centers but also as an extraordinary center of civilization, a city which has stood out for over a thousand years as the capital of empires. An objective we must never neglect is to ensure Istanbul is known for being a cultural center just as much as it is a shopping destination."