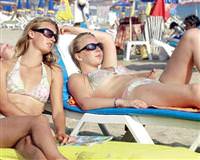 Russians increasing interest in visiting Turkey brings them closer each year to becoming the top nationality to vacation in Turkey.

As Russian tourists continue to flock to Turkey, they will soon take over German's spot as being the highest number of tourists to visit turkey.

Last year, 3.5 million Russian tourists came to Turkey, while 4.8 million Germans entered the country. However, also of note was the number of German citizens of Turkish heritage that are also included in that figure.

Russia, with a per capita income level at 10,000 dollars on average, is seeing an increase of nationals taking foreign vacations. The per capita income level being considerable higher in big cities such as Moscow and St. Petersburg is no doubt an attributing factor. Russians tend to prefer Mediterranean nations, such as Italy, Spain and Turkey as vacation destinations and provide a significant amount of activity for European tourism.

According to Turkey's Tourism Investors Association (TYD) Chairman Turgut Gür, Turkey's quality facilities and professional service makes it an important brand in global tourism. While a number of popular tourism countries saw significant drops in the number of tourists to arrive last year, Turkey had 31.5 million tourists visit last year alone, which according to Gür is a 15 percent increase compared to the year prior.

This year's objective is to host 33 million tourists, which will bring in 25 billion dollars in revenue, says Gür. ''Early reservations have filled completely. Despite the European crisis, we are not affected. The fact that we are able to draw in tourists from countries and regions that remain unaffected by the crisis is an influential factor. There is an increase in revenue from tourists from countries such as Lebanon, Russia and Kazakhstan. Russians are especially showing an increased interest in Turkey as each day passes. Last year alone, 3.5 million Russian tourists came to Turkey. They tend to prefer Kemer and Belek as destinations.''

TYD Chair Gür explains that in Russia passports are given out gradually, with only a certain number of nationals allowed to take out passports a year. Therefore, they are expecting an increasing number of Russian tourists to visit Turkey each year, says Gür. Explaining that Russians find Turkish facilities to be both high quality and affordable, Turgut Gür says, ''Last year there were 4.8 million Germans that came to Turkey, 3.5 million Russians and 2.5 million Brits. If it appears that the difference in numbers of Germans and numbers of Russians is over one million, it is actually deceiving, because out of the number of Germans that entered Turkey, a significant number were Turks with German passports. With this momentum of increase, I believe the number of Russian tourists will surpass German tourists by 2015."

According to the data, the number of Germans, Brits and Russians that visited Turkey between the years 2007-2011 is as follows: