Target for tourism at 50 billion dollars 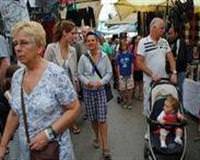 Deputy Minister of Culture and Tourism Dr. Abdurrahman Arıcı says Turkey’s tourism target for 2023 is to reach 50 million tourists and over 50 million dollars in economic revenue.

Attending an event for tourism hosted by the Kızkalesi Tourism Association and held at the Barbarossa Hotel in Mersin's Kızkalesi district, Arıcı stated, "Tourism is a very significant feature for Turkey. What first started in the 1980's has now reached 31.5 million tourists, and over 23 billion dollars in revenue. With all that has been done in the past ten years and with tourism becoming more widespread, we hope that by 2023 we will have reached 50 million tourists and will bring in over 50 billion dollars in economic revenue to our country."

Expressing that when it comes to tourism, municipalities have significant responsibility, Arıcı mentions the example of Alanya, noting how far it has come in terms of tourism. Pointing out the importance of transportation, Arıcı says, "The airport that will be built in Mersin by our government will contribute greatly. The divided road between Antalya and Mersin and the development of highways will also be a great contribution. These are naturally beautiful locations, and therefore great responsibility befalls our municipalities."

Arıcı goes on to express the needs to bring in investors to these regions and states, "In order to reach the 2023 target, everyone has a duty that befalls them. I am expecting everyone's contribution."
Mersin Governor Hasan Basri Güzeloğlu, says that tourism directly contributes to over 40 different sectors. "When we look at figures from the past ten years or so, Turkey has very clearly signed on to significant success. Tourism revenue has gone from seven billion dollars all the way up to 23 to 24 billion dollars. However our target is not in any way limited to this or reached."

Güzeloğlu says, "Despite the fact that Turkey has not yet presented all of its treasure to tourism, the country has still become an active route in global tourism. When we look at the 2011 figures for Mersin, which will provide great contributions to tourism in Turkey, we see that after Istanbul, it is the second largest city and center for Turkey's foreign trade.
Mersin's year-end figure of 34 billion dollars worth of foreign trade means it is becoming a significant port town especially in terms of international and foreign trade."