A city where civilizations meet 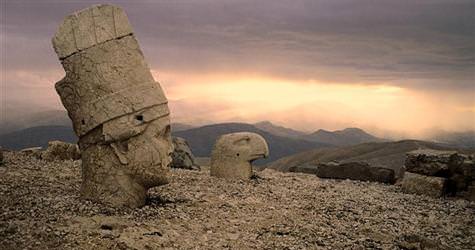 With its historical and cultural assets, natural beauty and magical monuments on Mount Nemrut which spans back to the Kingdom of Commagene, Adıyaman, which has been the host of 16 different civilizations, is looking to be more active in the tourism industry.

Listed as a UNESCO World Heritage Center, the 2,206 meter-high Mount Nemrut boasts magical structures that rise up to ten meters in height as well as meters' long inscriptions and is considered to be one of the best places in the world to witness the sunrise and the sunset. Adıyaman, which is also the home for the historical Perre Antique City, as well as tombs, castles, ancient ruins, rock tombs as well as a national park, is awaiting both foreign and domestic tourists.

The city also has high potential to become a prime faith destination as the Mor Petrus Mor Paulus Church is already one of the most popular locations to visit by foreign tourists. On Sundays, they also have the opportunity to attend a mass at this historical location.

According to District Director of Culture and Tourism Mustafa Ekinci, promotional efforts have resulted in an annual increase in the number of tourists that visit Adıyaman. Ekinci goes on to state that even though the tourism season has just begun, hotels in Adıyaman are already full. Mentioning that Adıyaman's sunsets are a magical experience, Ekinci expresses their goal to make Adıyaman a popular destination, and states, "When we look at the tourist figures from this year compared to others, there is an obvious increase. The number of tourists that come to our city increase every year. We just want everyone in the world to be able to experience this beauty."

A CITY WHERE CIVILIZATIONS MEET

Explaining that Adıyaman has been the home of 16 different civilizations, Ekinci states, "When one wanders the city, they are able to come across remnants from these varied civilizations. The fact that the unique Commagene civilization lived in this city is a wonderful fortune for us. Our historical city has also hosted the Hellenic civilization, the Persians, the Keldanis, Kumyks, the Romans, Byzantine, the Seljuks and the Ottomans. Therefore, we have an extremely strong tourism potential. Our only objective is to utilize this potential in the best way possible."