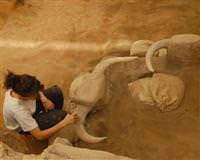 The vote took place by the UNESCO World Heritage Committee during a meeting in St. Petersburg, Russia. The Turkish committee attending the meeting was congratulated by other nations' representatives as the decision was received with applause.

The report, which the committee based its decision on, states that the site has witnessed a unique period of the Neolithic Era that spans back 7,400 years B.C. and contains an urban plan based on a social understanding and an ideal of equality which represents a significant era in the history of humanity. With the inclusion of Çatalhöyük, the total number of areas in Turkey which have been included in UNESCO's World Heritage List has reached 11. Last year, Edirne's Selimiye Mosque and Külliyesi were added to the list.