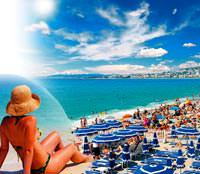 New policies put in place by Greece, Spain and Egypt in efforts to regain tourists lost has now completely altered the balance. The drop in VAT in Greek hotels and a tax increase in Spain only works to benefit Turkey.

The fact that tourism nations from the Mediterranean Basin are suffering from the economic crisis coupled by the developments following the Arab Spring has resulted in altering the balance of the region's tourism distribution.

The first announcement made by Greece's new Minister of Tourism Olga Kefalogianni, who came on as part of the new government established after the nation came face to face with bankruptcy, was that they would be dropping VAT rates in tourism facilities from 23 percent down to the 12 to 15 percentile level. Speculation is that this move will ignite competition through dropping hotel prices even further. However, approval for the financial resources to allow for this decrease must be met by both the European Parliament and the IMF.

In another attempt to recoup the numbers of tourists from England and Germany that were lost last year, the Greek Tourism Ministry has made a deal with Germany's fifth largest tour operator Alltours while efforts to regain their English market will be done through the support coming in from Europe. Greece has also embarked upon speeding up promotional efforts in a number of nations including Turkey.
Meanwhile, in an attempt to increase the nation's tourism revenue, Spain has announced they have initiated efforts intended to increase tax rates from eight to 18 percent. While this development has created an upheaval in the world of tourism, Michael Frenzel, the CEO of Germany's TUI and the country's largest tour operator states, "You could lose millions of tourists," warning Spain that this move may result in serious repercussions in the nation's tourism sector.

Egypt has begun drawing in tourists from Europe with a series of incentives including providing fuel for foreign tour operators' planes and offering a guaranty for empty seats on flights. By dropping prices to draw in tourists, Egypt's Ministry of Tourism has ignited competition with rivaling countries. However, due to the 50 degrees Celsius temperatures, Egypt's high season begins after September, which means there is no competition for Turkey.

TURKEY HAS BEGUN TO RALLY

Turkey has begun to recover tourism figures in the middle of the season. According to Sururi Çorabatır, Chairman of the Mediterranean Touristic Hoteliers Union, the economic instability experienced throughout Europe has influenced tourists to take precautions. "If tourists go on two vacations a year, they now ask, will it be Turkey or Spain," says Çorabatır.