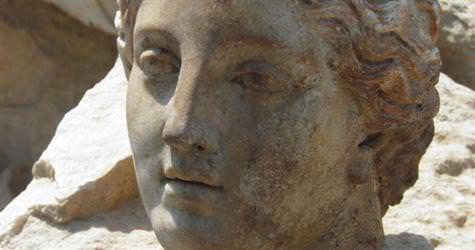 Excavations in the Parion Ancient City situated in Kemer village in Biga, have uncovered a sculpture of Artemis that spans back 1,800 years.

The Parion archeaological excavations, led by Erzurum's Atatürk University Archeology Department Professor Dr. Cevat Başaran in conjunction with the Ministry of Culture and Tourism with İÇDAŞ A.Ş as the main sponsor, are being conducted by students from universities throughout Turkey who are currently working on six different sections of the ancient site.

The marble sculpture was found in separate pieces at the Odeon (small theater) section of the excavation. Prof. Dr. Başaran explains that the sculpture of a clothed woman dated back 1,800 years, was approximately one meter, 70 centimeters in length and was carved from high-quality marble.
Başaran stated that a number of marble sculptures representing animals such as sheep and dogs were also found near the sculpture, which he referred to as, "belonging to the goddess of hunting and wilderness Artemis as evident by the bow and arrow she holds in her hands."