Izmir breaks a record with cruises 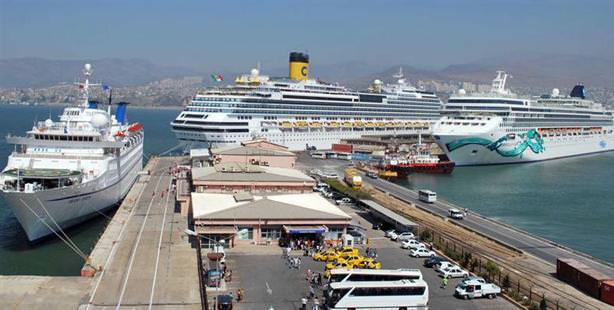 Director of Izmir’s Department of Culture and Tourism Abdülaziz Ediz recently announced that Izmir’s cruise ship tourism, which kicked off six to seven years ago with just 30,000 tourists, has now reached an annual 500,000 passengers.

Ediz also says that the 15,000 cruise passengers that toured the Izmir International Fair have brought smiles to the faces of local vendors.

Pointing out that the tourism sector is suffering from a recession in Turkey as well as in the rest of the world compared to last year, Ediz states, "It is obvious that cruises account for a significant share in the number of tourists that visit Izmir and its surroundings. Instead of a decrease, there appears to be an increase in the number of visitors that come to Izmir via cruise ships. In June of 2011, 46,105 passengers came in from the Alsancak Port. In June of 2012, this figure went up to 57,829." Ediz says that in addition to the tourists that come to Izmir on day-trips via cruises, there should be more numbers that stay longer, in which the area's ruins could contribute significantly to this.

According to Ediz, one third of Izmir's tourists visit historical sites such as Ephesus and Bergama, while a significant number of others visit locations in the city center such as the historical Kemeraltı Market. Ediz says the U.S. companies have begun to include Izmir in their offering of Mediterranean cruises, however up until now most passengers have been from Europe, with an emphasis on Northern European nations and China.

Ediz went on to emphasize the necessity for cruise tourism to offer support in filling hotels in the city year-round. "We need to work harder on making cruise tourism even more beneficial to Izmir's trade and tourism. Meanwhile, the 15,000 tourists that came to the city by cruise and checked out the 81st Izmir International Fair, managed to make vendors smile a bit."