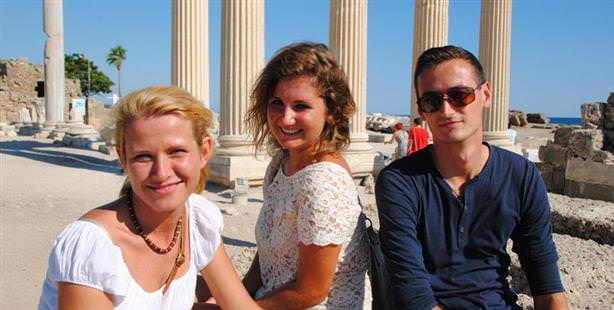 Next year, 300,000 Polish tourists are expected to visit Turkey on cultural tours of the popular Southwestern province Antalya, which is situated on the Mediterranean coast.

Polish tour guides have been intensifying efforts to expand Antalya's cultural and archeological tourism potential through offering tours of the ancient city of Side. With efforts to expand options and destinations offered, next year tour guides are expecting 300,000 Polish tourists to visit Antalya on these tours.
Polish tour guides Alina Skupieuska, Monta Mozgure and Adam Sedziak explain that in 2011, 200,000 Polish tourists visited the Antalya region. According to Ada Sedziak, they are expecting the number of Polish tourists that join cultural and archeological tours to reach 225,000 by the end of this year. Sedziak says that tourists from Poland, which has been an EU member for eight years now, select Turkey as their top travel destination, which they also find to be a 35 percent less expensive option than travelling to Spain, Greece and Egypt. Sedziak also says that Antalya happens to be their favorite province to visit, with districts Alanya and Kemer constituting their favorite destinations.

Underlining the fact that when it comes to culture and archaeological tourism Turkey has a lot more to offer than Spain, Italy, Greece and Tunisia, Sedziak says that the Antalya, Muğla and İzmir provinces are practically open air museums in themselves.

"Last year we brought 200,000 tourists to the Antalya region. By the end of this year however, we will have taken 250,000 Polish tourists on cultural tours. It is mainly Polish intellectuals that choose to embark on cultural and archaeological tours, which on average last for 12 days. In Antalya, tours are mainly held to the Alanya Castle, Perge, Letoon, Termessos, Side, Selge, Myra, the Xanthos Ancient City and the Kaş Kekova underwater cities. We have two tours a week to the Ancient City of Side and we hold tours three days a week to the Xanthos Ancient ruins."

Tour guide Alina Skupieuska says that for the past two years, Polish intellectual tourists have begun to show an increased interest in both Anatolian Seljuk and Ottoman artifacts in addition to the Antalya's region's Roman, Byzantine and Lycian cultural heritage.