No drop for Russian tourists 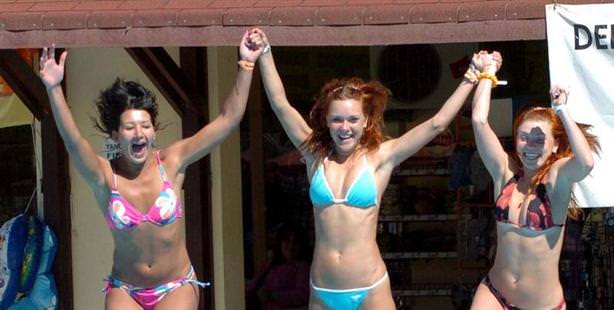 Representatives from the tourism sector state that the 2011 figure of 3.5 million Russian tourists that came to Turkey, will easily be met this year.

The two percent drop in the tourism sector, which both economically-based as well as due to the partial price regression in the European markets, has turned to a positive in August. Sector representatives state that September reservations are also looking good and therefore believe that the year-end figures will not be far behind if at all from the year prior. Tourism authorities say that when it comes to Russian tourists, a possible decrease is relative, however they overwhelmingly believe that they will be able to catch up to 2011's 3.5 million figure by the end of the year.


While in Moscow for the opening of a Turkish literary section in the Oriental Literature Center situated next to the Kremlin Palace, Ministry of Culture and Tourism Undersecretary Özgür Özaslan explained that although there was a 1.87 percent drop in the number of tourists that came to Turkey in the January to July period compared to last year, at 17,295,000 visitors, figures for August and September appear to be higher than last year's figure for the same months, therefore it will most likely be possible that Turkey will be able to reach the 31 million tourist mark from last year. Özaslan also explained that in 2011, approximately 3.5 million tourists came to Turkey from Russia alone. This year, however there has been a 1.6 percent drop, with just 2,045,000 Russian tourists thus far.

Pointing out that bilateral relations between Turkey and Russia are developing fast politically, economically and trade-wise, Özaslan stated, "The increase in cultural events is also contributing to joint relations. Dialogue between the nations is on the rise. In addition, that fact that Turkish television shows are being watched in Russia is also promising. We need to deliver positive messages," says Özaslan.
Mentioning that after Germans, Russians are the top nationality to visit Turkey, Özaslan stated, "After speaking with tourism officials, there is a 16 percent regression, however, last year there was a demand shift from Middle Eastern and North African countries I hope that we will be able to catch up to the 35 million level with Russian tourists. I don't think it will be much lower than that."

Commenting on the hearsay that Turkey as a destination has gone up in price, Özaslan said, "Countries that suffer a market loss tend to drop prices. For us, it is crucial to not make any concessions on service. The sector can make their preference best on a free market understanding. When we discount prices, we place high importance on not making any concessions on service."

Remarking that Russia and Turkey have been two close neighbors for hundreds of years, Özaslan stated, "We don't have the luxury to neglect Russia in any area."