Greece’s Tourism Minister: We want to collaborate with Turkey 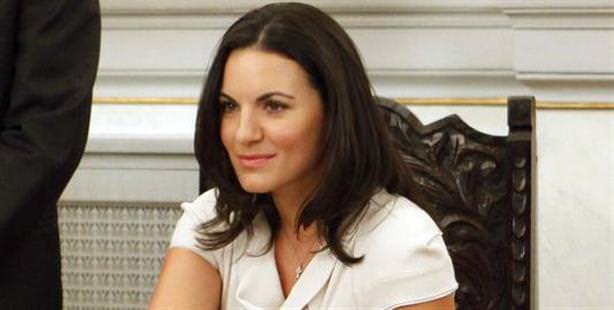 Our neighboring Minister of Tourism Kefaloyanni, who is also known as the ‘Cretan Beauty’ had the opportunity to relay her main objectives to SABAH prior to her visit to Istanbul.

Greek Minister of Tourism and Development Olga Kefaloyanni is widely considered to be one of the most favored and dynamic female deputies in the Greek parliament. Kefaloyanni studied law in universities in Athens, England and the United States only to serve as an attorney of law in both Greece and abroad up until she was elected as the Crete Deputy for the New Democracy Party five years ago.

Tomorrow, the Greek minister arrives to Istanbul to meet with her Turkish counterpart in a trip intending to increase collaboration between Turkey and Greece. Kefaloyanni answered questions from SABAH prior to her trip.

Tourism in Greece this year has not reached the anticipated results. What do you think the reason is for this drop?

"The economic crisis has affected tourism, just as it has all other areas. Tourism is a locomotive power for the Greek economy and therefore I am extremely certain we will be able to revitalize the sector. We are preparing a national strategy for the long term. We will be putting our hospitality, expertise and experience in tourism to the forefront once again; in order to regain the nation's rattled esteem."

In what way could Turkey contribute to your efforts?

"There are a lot of areas which offers opportunities to collaborate with Turkey. These are the issues I want to discuss with my Turkish counterpart Ertuğrul Günay. For example, we could collaborate in areas such as air travel and touristic ships. We want to promote Greek tourism options in Turkey. We want the Greek Islands to be the first preference for Turkish tourists' vacations."

The pilot program on expediting the visa process for Turkish citizens that you implemented this year resulted in increasing the number of Turkish tourists that came to Greece. Will this service continue?

"Yes, a very significant step was taken with this program. The fact that the number of Turkish citizens that visited the Greek Islands rose, shows that this program was extremely fulfilling for all sides. We have a long way to go however, to be able to take this step as well as others. Both nations are serving as ambassadors of stability and security for the geography we are situated in. The foreign policy of today, utilizes these factors as a basis. When Minister of Foreign Affairs Dimitris Avramopoulos spoke at the assembly recently, he announced that Turkey's Foreign Minister Davutoglu will soon be paying a visit to Athens. As investments and trade increases, our relations will also be reinforced and will be seated on more solid ground."

'TELEVISION SHOWS DO NOT REFLECT A CULTURE IN ITS ENTIRETY'

Are the number of Turkish television shows that are being played on Greek channels helping the Greek public to better understand Turkey's culture and lifestyle?

"Television stations can only slightly reflect a nation's culture and habits; it cannot reflect its entirety. There needs to be a solid foundation based on systematic efforts in order for mutual trust to be established and for both nations to be better familiar with one another. This could be done through organizing mutual cultural activities."


In an address you delivered recently you mentioned that we needed to continue where Mustafa Kemal Atatürk and Greek leader Eleftherios Venizelos left off in taking steps to reinforce mutual relations. How do you feel it would be possible to further relations from where these two leaders left off?

"We can further relations through communicating openly and clearly with one another, by displaying mutual trust and by respecting the principles of being good neighbors. In recent years, Turkey has shown their good intentions whether it be through the Patriarchate or how they have treated the non-Muslim minority.

Greece's message is as follows: We hope to have good relations and to get along well with our neighbors based on mutual respect in honor of our histories, cultures and nation.

I will be paying my second official international trip to Turkey. I also want to visit the patriarchate during this trip," stated Kefaloyanni.