Rumi-lovers from around the world to convene in Konya 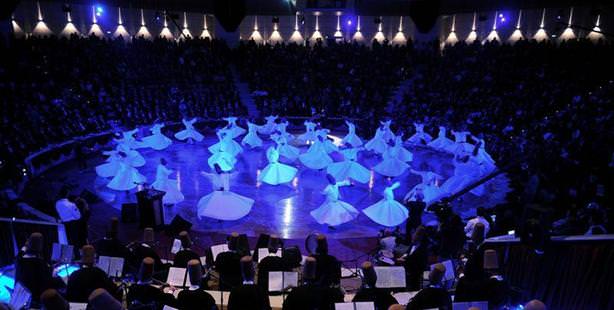 This year, Rumi-lovers will be gathering in Konya in order to commemorate the death and celebrate the life of Jalal ad-Din Muhammad Rumi on the anniversary of his passing.

Referred to as "The Wedding Day" (Şeb-i Arus), the December 17th anniversary of Rumi's death brings thousands of people from all over the world together at the 13th century Mevlana Mausoleum to honor the Sufi mystic and poet's reunion with his beloved, "the Divine".

The "Wedding Ceremony" celebrations offer the perfect opportunity to gather with fellow admirers of Rumi's teachings in Konya, the place of Mewlānā's birth, while also providing the opportunity to see mystical historical sites that bring to life the days of Rumi.

Jolly Tur has organized a very unique tour to visit the province during the December date of Şebi-i Arus and includes a series of unforgettable stops throughout Konya, including Alâeddin Mosque, Karatay Medrese, Tuzcu Baba Tomb, Akşehir and the Nasrettin Hodja Tomb as well as the chance to watch a live Whirling Dervish ceremony.

The first stop on the tour is to the Alaeddin Mosque. The building, which sits amongst green trees and leads straight on to the city's main artery, Zafer Street, once served as the "Mosque of the Throne" for the Seljuq Sultans of Rum and also contains the dynastic mausoleum. It was constructed in stages between the mid-12th and mid-13th centuries and stands out for its attention-drawing cone-shaped dome.

The İnce Minareli Medrese (literally Slender Minaret Medrese) is a 13th century medrese (Islamic school), known for its unique stone-work and elegant minarets. Situated in the center of the market, the medrese is like a jewel from the past. The building has a highly ornamented stone façade which includes relief work of scripts, geometric patterning and vertical ribbon-like lines, making it one of the most significant medreses in Anatolia.

The next stop on the tour is to the Karatay Medrese. Built in 1251-52 by the Emir of the city Celaleddin Karatay, who served the Seljuk sultan. The Karatay Medrese houses Konya's finest Seljuk Turkish tilework.

The Karatay Medrese, located on the skirts of Alaeddin Hill, was one of the most famous educational institutions of its time and is also considered to be a masterpiece due to its stunning architecture, dome and adornment. The medrese, which successfully combines face stone, marble bricks and tiles, is an enclosed single-story structure with walls and domes covered entirely in tiles.

There are three rooms that lead off from the central courtyard in the medrese. One contains the tomb of Celaleddin Karatay, while the other has tiles, china and glass plates from the Kubadabat Palace located on Beyşehir Lake. The final room houses lamps and gypsum from the Seljuk and Ottoman periods.

While in Konya, a visit to Akşehir and Nasreddin Hodja's tomb is inevitable. The precise date of the original construction of the tomb is still unclear. However, in 1905 Akşehir District Governor Şükrü Bey 1905 had the tomb rebuilt. The only relic remaining from the original tomb is the center tomb section. The date of Nasreddin Hodja's death is inscripted as 683 (1284) on the tomb which is the date of his actually death in 386 spelled backwards.

This is just a small slice of what will be included in the December Şeb-i Arus Tour; therefore we suggest you experience the mystical atmosphere for yourself.