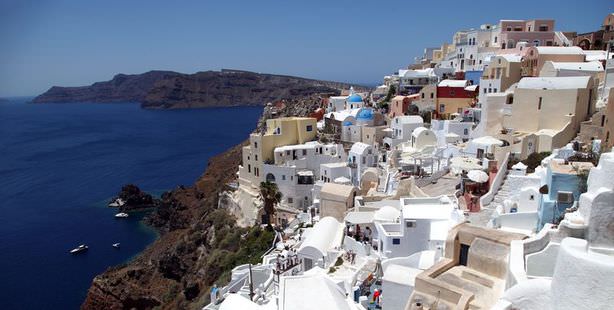 During his upcoming trip to Istanbul, Greek Prime Minister Samaras will be announcing visa-facilitating measures for Turkish nationals that will offer a relief from the strict regulations for the EU’s joint Schengen visa. The process of lifting visa regulations for Turkish citizens to visit certain Greek islands may now be expanded to include the entire country.

A 'pilot program' initiated by the Greek administration to facilitate visas for Turkish citizens to visit Aegean islands adjacent to Turkish shores may soon be expanded to include all of Greece. Last year, Greece lifted visa requirements for Turks for up to two weeks to the Lesbos, Chios, Samos, Rhodes and Kos islands.
Greece's Tourism Minister Olga Kefalogianni, who will be accompanying Greek Prime Minister Andonis Samaras on an official trip to Turkey on March 4th-5th, recently stated that Greece will be making a number of significant announcements regarding facilitating visas for Turkish citizens that want to visit Greece.

Speaking to SABAH prior to her Istanbul trip, Greek Tourism Minister Kefalogianni explained that following extended deliberations with the EU, the lifting of visa regulations for Turkish nationals to visit Greece will no longer be restricted to the summer months and will now become a year-long practice. Kefalogianni, joined by the Greek Ministry of Foreign Affairs, has worked extensively to have all border gates, including the Athens and Thessaloniki airports, be inclusive in the "temporary visa facilitating process."
Although it has not yet been clarified to what degree Kefalogianni's efforts to win over the EU have succeeded, as far as we have heard, Greece is in essence preparing to be the first country to "break through" the Schengen visa's strict regulations for Turks.

A JOINT PACKAGE FOR TOURISM

Greek Tourism Minister Kefalogianni also said that during meetings in Istanbul between Prime Minister Recep Tayyip Erdoğan and Greek Prime Minister Samaras, they will be discussing the preparation of a joint-tourism package for third-country nationals that want to visit both Turkey and Greece. According to Kefalogianni they will be embarking on the necessary measures on the issue prior to the start of the summer season.

Kefalogianni also explained that they have begun restoring the Ottoman and Byzantine relics throughout the country and mentioned the current renovation work being done on Atatürk's home in Thessaloniki as an example of their ongoing efforts.