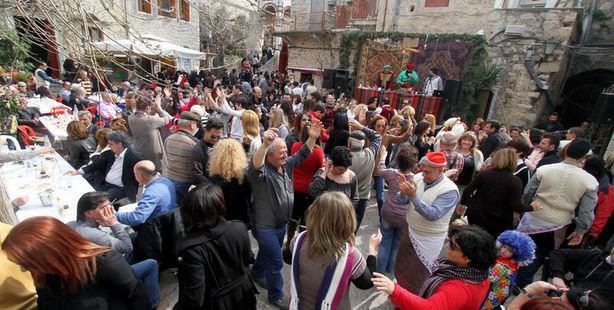 This year’s Apokries Carnival, a traditional held annually on the Greek Island of Chios, saw crowds arriving from Turkey to attend the festivities. Nearly one thousand Turkish tourists came out from Izmir and Çeşme to become part of the island’s carnival atmosphere.

This year, nearly 1,000 Turkish tourists participated in the Apokries Carnival, which is held each year prior to Easter on the Greek Island of Chios. With this year's celebrations held from March 16th-18th, which hit the weekend, Turkish tourists flocked to the Chios from Izmir, Çeşme and Alaçatı for two to three days, spending their time enjoying the various events held throughout seven villages on the island.

Feasts in village squares were followed by festivities that went late into the night. Chios Island Municipality Tourism and Human Relations Director Rena Damigou stated that this year's celebration was extremely lively, which she attributed to the promotional efforts made in Izmir. "Turks like this notion," said, Damigou.
Chios Municipality Tourism Development Committee Chairman Koustos Moundros said, "We are thinking about promoting some of our other traditions in Izmir. We are also anticipating Turks to visit for Rouketopolemos during this Easter in May."

Rouketopolemos, also known as "Rocket War" is a traditional event celebrated in Chios every year at Easter and involves two rival churches setting off thousands of flares.

This is a translation of an article originally written by Şafak İnce.