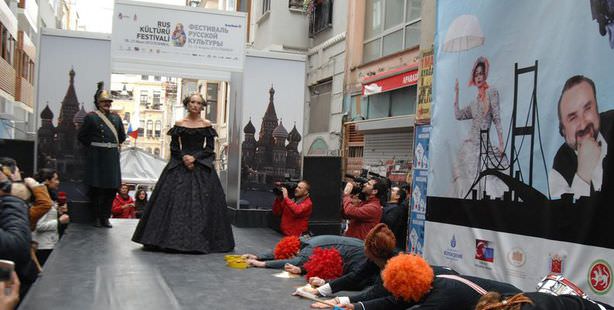 The Russian Culture Festival has brought an air of festivities to Istanbul’s famous İstiklal Street.

The Russian Culture Festival, which was organized by the Turkish-Russian Cultural Foundation and held along Istanbul's famous İstiklal Street, hosted a number of festivities including a runway show of famous characters from Dostoyevsky's literary works, a display of Russian crafts and dances.

Citizens flocked out to witness Russian performers introducing famous characters from Dostoyevsky's historical works donning specially designed costumes to represent the famous Russian writer's literary heroes and the time period for which they were written.

Handmade Russian crafts were put on display in tents set up on Taksim's İmam Adnan Street. One of the most stand-out events of the festival was a showing of costumes worn by individuals representing heroes from the famous Russian writer Dostoyevsky's novels.

A number of well known literary characters such as Raskolnikova from Dostoyevsky's Crime and Punishment as well as the Karamazov brothers were represented on a runway set up for the event. Acting in character, the heroes were highly entertaining for visitors who widely documented the moment by taking photos.

Journalist-writer Nuriye Akman who said she came out to the festival just to watch this event, stated that this was the first time she had heard of the concept of a 'Literary Runway Show', which she said she found to be quite interesting.

Noting that for her, the characters were not an exact match to what she has read and seen of Dostoyevsky's works, Akman stated, "Films, theatrical works and books are all different. I grew up reading Dostoyevsky's books. A book is written, it is completed and then every reader rewrites that book. However, the 'Literary Runway Show' was an interesting experience.

Valeriy Kuhareşkin, who played the character of Knyaz from the Russian writer's novel 'Uncle's Dream' explained that what they were doing was street theater. "We are acting like the characters in Dostoyevsky's novels. We are trying to reflect that era. Of course, in doing so, our aim is to make a contribution to Turkish-Russian relations."

Another Dostoyevsky reader said that the show presented an accurate representation of the characters in the books and pointed out that the actor playing Raskolnikova from Crime and Punishment fit in most with his character.