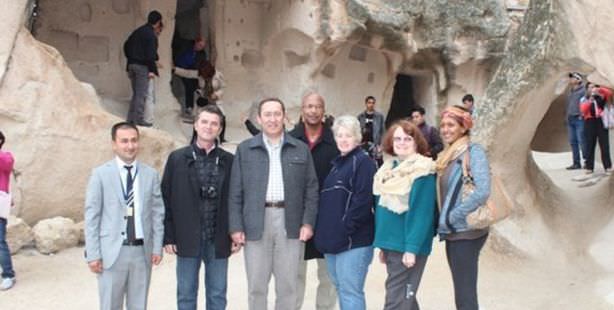 The Mayor of Houston, Annise Parker, recently toured the Avanos district in Nevşehir, situated within the historic and touristic region of Cappadocia.

Joined by a delegation, Houston Mayor Annise Parker toured the Avanos district of Nevşehir which is located in the historic and touristic region of Cappadocia.

In Turkey to hold a number of meetings and to take part in a series of tours as the mayor of a sister municipality to Istanbul, Parker and an accompanying committee also paid a visit to the popular Cappadocia region.

Annise Parker is one of the United State's first female mayor, serving for the city of Houston in the state of Texas. Mayor of Avanos Mustafa Körükçü accompanied Parker and her delegation as they toured the popular historic and tourist destination.

Parker also had the opportunity to witness earthenware pottery making, which is one of the region's most famous historical traditions dating back to the Hittites.